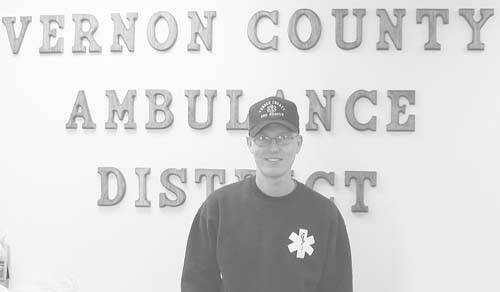 Vernon County Ambulance District Paramedic and U.S. Navy reservist Travis Neher has been called up with the 3rd Battalion, 24th Marines for duty in the Middle East. The 24th Marines will be assigned to the 1st Marine Expeditionary Force from Camp Pendleton, Calif. Neher isn't sure where he'll end up. "It's kind of up in the air. I'm not sure exactly where I'll be going. I guess I'll find out when I get there."

Neher is a hospital corpsman 2nd class but hopes to advance while on active duty. "A lot of people are moving up with the deployment and everything."

Neher will either be posted to a company to be their medic or to a battalion aide station, the first stop in the chain of treatment centers for casualties. "If I'm assigned to a company, my job will be to be there if someone gets injured or sick -- like in the movies when you see someone yelling 'Medic!' -- that would be me," he said.

Not only is Neher unsure of where he's going, he's unsure of how long he'll be there as well. "As far as I know my deployment will be a year at a minimum and 24 months at a maximum. I don't have any idea which it will be."

Vernon County Ambulance District Director James McKenzie is proud of Neher but says he will miss him. "Travis has been great, he has a lot of enthusiasm and constantly amazes me with how much (energy) he has. He will bike over to El Dorado Springs and back before I've had my morning coffee. He really is an asset to the district and we'll all miss him."

Neher isn't the only district employee that may face deployment, Leland Splitter, is a member of the National Guard but isn't scheduled for deployment yet. "If Leland goes too we'll really be hurting. We were already a little short before Travis got his notice so now we're down at least one full-time position and if we go down another we'll be critical."

Losing the two men calls attention to one of the problems faced by the district -- the lack of paramedics, who are more highly trained than EMTs -- similar to the problem hospitals are facing with getting enough RNs.

"There's a high burn-out rate, it's a tough job, and it takes two years to train for. If I had two who walked in the door tomorrow, I'd hire them," McKenzie said.

The shortage of trained paramedics is statewide and ambulance districts from St. Louis to Kansas City are facing a lack of personnel. "This is a state-wide problem. We were at a meeting in Kansas City where this was discussed. Places all over are facing shortages. One suggestion is to have an intermediate level between EMT's and paramedics. That might relieve the shortage some and we would be better able to serve the public," Mckenzie said.

McKenzie praised the employees who serve in the National Guard and said he admired them and looked forward to Neher's return.

"The guys in the guard have the tough job, we have it easy. We all look forward to getting him safely back."