From staff and wire reports 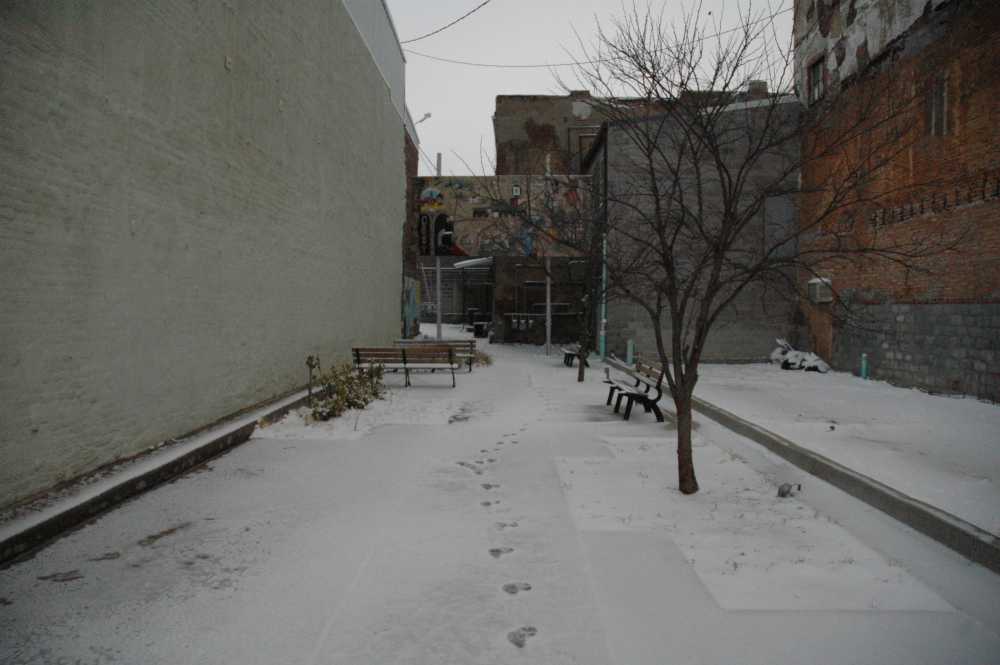 Steve Moyer/Daily Mail-- The pocket park on Cherry Street, on the Nevada Square, wears a thin blanket of snow. The bulk of the snowfall bypassed Nevada, but other parts of the state experienced heavy snowfall overnight.

A major snowstorm forecast for much of the southern half of Missouri made for some slick roads in Vernon County, with less than two inches of accumulation in Nevada, but dumped up to five inches in far southwestern and south-central Missouri and snarled traffic in St. Louis, keeping road crews busy Thursday and closing schools early as more was forecast into the night.

This morning found St. Louis digging out of about eight inches of snow, but some Vernon Countians reported not even having to scrap windows today, having been out late last night.

Sheriff's departments and the Missouri State Highway Patrol in southwest Missouri reported multiple cases of vehicles sliding off wet or snowy roads but no serious injuries. No injury accidents were reported by the MSHP as of press time today.

The snow began falling late Thursday morning in St. Louis and didn't take long to cause problems. Traffic crawled on the region's roadways by afternoon rush hour, even though accumulations were relatively minimal.

Snow was blamed for scattered accidents, including two separate crashes that closed a two-mile stretch of Interstate 64 in St. Charles County in both directions.

The roadway was reopened about 2 p.m., but traffic was backed up for miles.

One person was taken to a hospital.

The Highway Patrol said most of the eastern Missouri accidents were in St. Charles, Jefferson and Franklin counties.

Several St. Louis area schools called off classes for Friday, with the region expected to get up to 8 inches of snow.

The first band of snow arrived from the west in the morning, dumping up to five inches in some areas along the Arkansas-state line but only dusting areas farther north, including Springfield.

The National Weather service expected up to 8 inches by early Friday in far southwest and southeast Missouri and three to four inches farther north.

''It's pretty much been snowing nonstop all day,'' said Sheriff's Deputy John Wynn in McDonald County on Thursday.

''Our crews are keeping ahead of it,'' said Angela Eden with the Springfield district of the Missouri Department of Transporta-tion. Eden said drivers should slow down and treat any wet-looking pavement as slick, especially on bridges and overpasses.