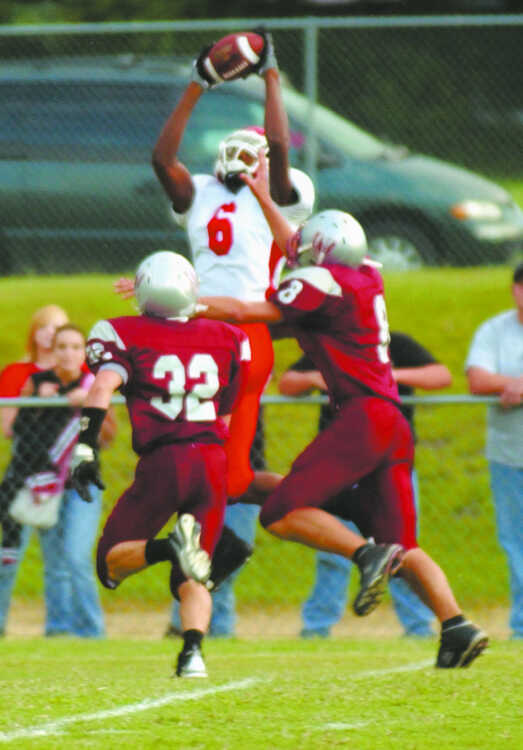 Nevada's offense stuck to the running game early and after a fumble on a fourth down quarterback sneak by Taylor Scotten, Nevada turned the ball over at their own 30 yardline. It only took Fort Scott one play to take the lead -- a 30-yard touchdown pass to Alex Barner.

Colby Shepherd returned the ensuing kickoff past the 30 to give Nevada favorable field position, but were unable to convert when Shepherd's fumble on second down was recovered by Gary Floyd. It took a few more plays this time, but Fort Scott's offense was able to overcome the Nevada defense once again on a 4-yard run by Chris Archie to give Fort Scott a 12-0 lead.

Nevada's offense began to find its rhythm on the next drive. Sparked by a 20-yard pass to Casey Long on the first play of the drive -- and despite being plagued by penalties inside the red zone -- Nevada was able to come up with a touchdown run by Casey Long, cutting the Fort Scott lead to 12-6. After an illegal block on the ensuing kickoff, Fort Scott's next drive started in Nevada territory.

Nevada's defense stepped up and was able to shut Fort Scott down and force a punt, but another fumble gave the Tigers of Fort Scott the ball back deep in Nevada territory. With 9:21 to go in the half, the lights on the north side of the field went out and the game had to be suspended until officials could find out what was wrong and come to a solution.

After several minutes of waiting, the lights were brought back up and the teams were again allowed to take the field. Fort Scott's offense didn't seem to miss a beat in the delay and only needed three plays to add to their lead once again on a touchdown run by quarterback Aaron Judy followed by a 2-point conversion, making the score 20-6.

Nevada looked to put together another drive, but Scotten dropped a fourth down snap at midfield and was stopped for no gain, resulting in a turnover on downs. Fort Scott looked to take advantage of the good field position but a sack followed by and incomplete pass led to a fourth down and long for Fort Scott.

Fort Scott failed to convert and Nevada took over on downs deep in their own territory. Nevada was able to march the ball to near midfield, but yet another fumble stopped the drive short and gave Fort Scott tremendous field position.

On the very first play of the following drive, Jake Lawry came up with a sack that resulted in a fumble and gave the ball back to Nevada. The Tigers were again unable to move down the field, and were forced to punt the ball away after Fort Scott called timeout with 25 seconds left in the half.

Fort Scott was unable to move the ball on their final drive and time expired after three incomplete passes to take the game into halftime with Fort Scott up 20-6. Nevada outgained Fort Scott in the first half 119-117 and most of the game stats looked even, but six Nevada fumbles -- five of which were lost -- turned out to be the difference in the half.

Fort Scott's head coach Don Epps complimented Nevada for their intensity in the first half.

"In the first half, give credit to Nevada, they played tough and physical," Epps said. "We didn't make a lot of adjustments at halftime. It was just executing the offense. And I felt the the kids took the challenge to come out in the second half and play better and they did."

Fort Scott's offense came out with even more intensity in the second half and drove the ball down the field to score on a 61-yard touchdown run by Mitchell Stoughton to make it 28-6 after a 2-point conversion.

"He does a great job of running the counter," Epps said of Stoughton's run. "That's a misdirection play. He stayed behind his blocks well. Andrew McGee and Cole Murrin did a great job of getting up into the hole and Mitchell patiently waited on it. Then when the seam hit, he took it and went."

Nevada's offense quickly fizzled, sending out Ron Johnson to punt the ball back over to Fort Scott.

After a good return, Fort Scott took over inside the Nevada 30 and drove the ball into the endzone through the air, giving them a 34-6 lead. Nevada looked to get a drive going, but after an interception by Griffon Knopp inside the Fort Scott 40, the drive came up empty.

Fort Scott was once again able to have their way with the Nevada defense and after a short touchdown pass to Archie, the Tigers were able to extend their lead to 41-6 with 1:48 to go in the third quarter. Nevada continued to focus on the running game to start their next drive, but were able to come up with a 25-yard pass play to Tyler Dobson just as time expired in the third quarter.

Scotten started the fourth quarter by throwing another interception to Knopp on the very first play that once again gave Fort Scott great field position. Fort Scott was unable to convert once again and Denzell Davis' fumble gave the ball back to Nevada just inside Fort Scott territory.

This time Nevada was able to march down the 45-yard field they were given and came away with a touchdown, making the score 41-12 with 4:46 to go. Knopp came through for Fort Scott once again on the kickoff, giving them the ball at the Nevada 42 yardline.

Fort Scott marched past the Nevada defense and after a 24-yard run by backup quarterback Ben Gettler and a 2-point conversion, extended their lead to 49-12. Nevada took over at their own 40 after the kickoff and stuck with the running game -- seemingly content to simply run out the clock.

The Tigers held the ball for the final two minutes of the game, leading to the final score of 49-12.

After the game, Fleeman spoke highly of his defense. "Our D-line played well," he said.

Fleeman noted that his defenders played "good assignment football" but still made a few mistakes. Since this is the final week of suspensions for most of Nevada's missing varsity players, Fleeman also noted that some players may be pulled and others may stay, but the best players on the team will be the ones on the field and any changes will be determined by the next week of practice.

With this loss, the Tigers fall to 0-2 on the season and will face Butler next Friday at 6:30 p.m. in another home game.

Fort Scott will move on to Independence, a team Epps believes the Tigers are ready to play

"We know we have to gear up for a good Independence team," Epps said. "We have to just keep focusing on Fort Scott football and make sure we're fundamental, execute our offense, run the base formations and get better at running those. And that's what we're going to do."

Comments
View 4 comments
Note: The nature of the Internet makes it impractical for our staff to review every comment. Please note that those who post comments on this website may do so using a screen name, which may or may not reflect a website user's actual name. Readers should be careful not to assign comments to real people who may have names similar to screen names. Refrain from obscenity in your comments, and to keep discussions civil, don't say anything in a way your grandmother would be ashamed to read.
Respond to this story