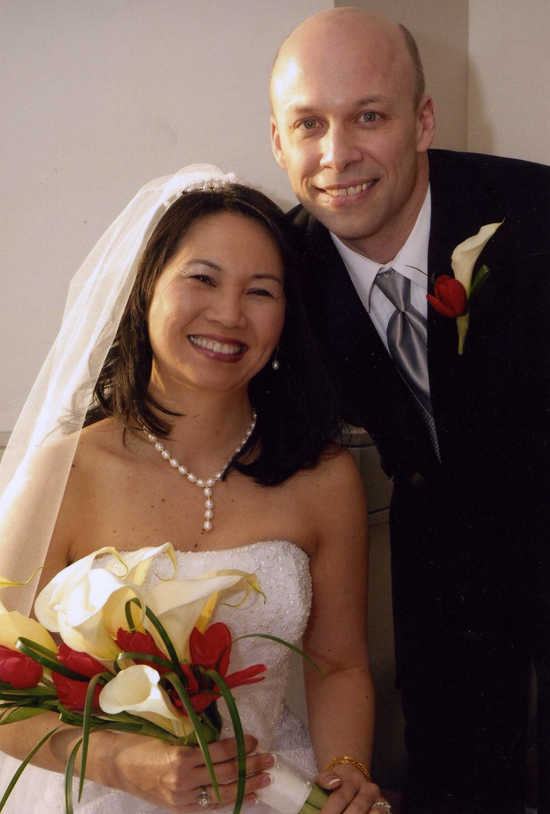 For the early spring wedding, the chapel was decorated with calla lilies and white bows down the isle. A white linen cloth covered the altar table which held the unity candle flanked by red tulips, calla lilies, and white cathedral tapers.

Processional music included "Jesu', Joy of Man's Desiring" and "Canon in D," heralding the arrival of the bride, who was given in marriage by her brother, Keith Gong, Bristol, Tenn.

The bride chose a white strapless gown designed by DaVinci, of lace and pearls over satin with a mermaid skirt that extended into a chapel length train. Pearls held her hair at the crown securing the chapel-length veil of tulle. She wore shoes that were hand beaded with pearls. The veil and shoes were designed and created by the bride. The bridal bouquet contained red tulips and calla lilies adorned with crystal dew drops.

The gold bracelet that her mother had made for her as a child with 24 karat Chinese gold was "something old." "Something new" was a white bride's handkerchief and a pearl necklace. "Something borrowed" was a hand bag loaned to her by her sister. To complete the "something blue," the bride sewed her initials and the groom's initials into the side seam of her gown with blue ribbon.

The wedding programs were dispersed by Miss Alexis Gong, niece of the bride, Bristol, Tenn.

Maid of honor was Debra Gong, Chicago, Ill., sister of the bride. Shannon Kent, Bloomington, Ill., friend of the bride, was bridesmaid. The attendants wore floor-length gowns of garnet red French satin, with a bugle beaded halter strap that wrapped around the bodice to the waist in back. They wore pearl bracelets, and carried white tulip bouquets.

Flower girls were Abigail McKnight and Madison Bever, adopted daughters from China of friends, Melissa and David McKnight, and Kelly Bever, respectively, all of Bloomington. They wore sleeveless, knee length, white bridal satin dresses featuring a crystal sheer organza overlay skirt with a coordinating organza waist sash and white rose. Their dresses were paired with white tights and white leather ballet slippers, and a princess-style head wreath of white satin flowers with pearl beads and a ribbon bow at the center back. As they scattered red rose petals, they carried baskets made by the bride of white satin with white ribbon and silk flowers.

Jody Ayers, soloist, sang "The Wedding Song" and "The Lord's Prayer," accompanied by Dr. Susan Kloztbach, organist. Following the marriage ceremony and prayer blessing, "The Wedding March" was played for the recessional.

A reception dinner was held at The Parke Hotel atrium room in Bloomington. Upon entering, guests signed a traditional Chinese Red Silk Signature Cloth for the newly married couple, attended by Miss Alexis Gong. Later, it is to be framed and displayed, as a keepsake of their special day. The room was decorated with Chinese Lanterns to help demonstrate recognition for both Eastern and Western cultures. Guests were seated at white linen covered tables and chairs, adorned with large red bows. Chopsticks and red Chinese favor boxes filled with candy and embossed with the "Double Happiness" character, a Chinese tradition symbolizing a joyous and special occasion were at each place setting for souvenirs. Centered on the cake table with a white linen cloth was the traditional three-tiered cake, iced with cream frosting and topped with fresh red roses.

The bride changed into her Chepngsam before the newlyweds personally met and greeted friends and family seated at each table. The Chepngsam is a traditional silk red dress, embossed with a gold phoenix and dragon symbolizing harmony, and worn by the bride at her wedding reception.

Prenuptial festivities included a shower given by the maid of honor and bridesmaid. The rehearsal dinner was hosted by the groom's parents at CJ's Restaurant, Bloomington.

For a trip to Cancun, Mexico, the bride chose to wear jewelry passed to her by her mother and a ring and bracelet given to her by her great aunt, Mrs. Sophie Der, Chicago, who was hospitalized and unable to attend the wedding. An extended fall honeymoon trip is planned to tour the western United States.

The groom, a Fellow of the Society of Life Insurance Actuaries (FSA), is the investment information manager, Fixed Income Investments Department, State Farm Mutual Insurance Co., Bloomington. He received his Bachelor of Science - Finance Major from Illinois State University in 1987. He is the son of Larry and Loreta Jent, Bloomington. The groom is the grandson of Winfred Jent and the late Marie Jent, Fort Scott, Kan., and the late Clarence and Lena Wood, Hammond, Kan.