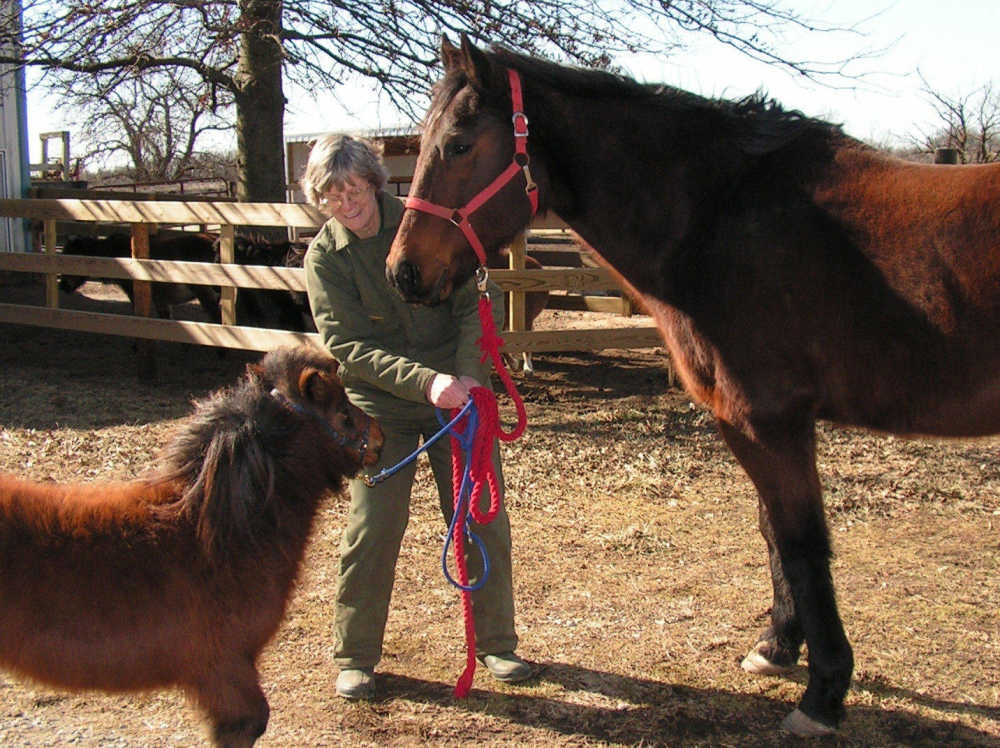 Carol Parmenter has no intentions of taking up the rocking chair after her November 2008 retirement from the Vernon County office of the University of Missouri Extension program. After 18 years of service as the office's youth specialist, Parmenter is busy on her farm with her animals.

To date she has five cats, and six dogs; five of the dogs have been rescued. She has a small flock of chickens. And she has one quarter horse and nearly two dozen miniature horses. Her focus is on the miniature horses. She began raising miniature horses two years ago and has since built up a herd which includes 10 brood mares, a couple of stallions and several yearlings.

Miniature horses have been around for a long time. According to www.mini-horse.org, during the mid-17th century, Louis XIV had, at his famous Palace of Versailles, a "vast zoo" containing, among many other things, some miniature horses. The site goes on to say that "Most agree that the original small ponies were bred-down from Shetland stock to produce small work horses for working in the coal mine areas of Wales." Parmenter doesn't use her horses for that kind of work.

Even though the miniature horse has been here for several centuries, they have just become popular in the last few decades. "In 1978, the American Miniature Horse Association officially established the Miniature Horse as a separate horse breed," according to the mini-horse.org Web site.

As with all such organizations the American Miniature Horse Association has strict standards that animals must meet to be registered and they have a very clear-cut idea of what they are trying to achieve with their animals.

"The breed objective is the smallest possible perfect horse," according to their Web site. To be registered with the AMHA, the animal "must measure not more than 34 inches at the withers at the last hairs of the mane," says the site.

Many of Parmenter's horses fall into that category, but some of them don't and are registered with the American Miniature Horse Registry. The requirements for inclusion in their registry are 34 to 38 inches. Horses on the short side are Division A and the taller animals are Division B.

Though they keep her very busy, Parmenter wouldn't have it any other way. She loves animals, especially horses. "I've had horses all my life," Parmenter said. Even though the miniature horses are too small to ride, Parmenter keeps busy breaking them to the halter. Having them halter broke "makes them easy to lead and to load," she said. It makes them easier to groom too!

Parmenter keeps her horses on just 20 acres. It doesn't take a lot of land to raise them. In fact, she said if you turn them out to feed on lush green grass, they will founder, "they make absolute pigs of themselves."

She feeds her horses hay and a commercial feed produced just for the breed. Compared to full sized horses, miniatures are more economical to keep, but they are a little more labor intensive. The same medication it takes to worm her quarter horse will worm five of the minis, but it takes a corresponding amount of time to work the five.

Parmenter and several other members of the newly formed MoKan Minis organization use their animals for pulling carts and participating in parades and other events.

Parmenter said her greatest pleasure in raising and working with the horses comes from her work in Pet Therapy. She takes the animals into nursing homes and hospitals and schools.

Miniature horses aren't normally shod, but Cookie, the alpha female of the herd, has a pair of shoes she wears when needed for therapy. Cookie is normally a bit of a bully with the other horses, but "she is like a puppy dog with her shoes on in a school," Parmenter said. She said she has the kids read to the horse and it is amazing to see and listen to a child that would not read to their classmates but will read to a horse. "I really enjoy doing the pet therapy; it's very rewarding if you know you're just doing a good thing," she said.

She went on to say that the rumors about the breed being mean spirited are just that, rumors. She said, " it's how they're handled" that determines their demeanor. They are very intelligent animals too! Parmenter does have horses for sale and the prices are comparable to those of regular horses.

She prefers to sell yearlings but they are all for sale. This spring she intends to begin training a young stallion for show. The little stallion is a beautiful black and white paint horse with blue eyes and what Parmenter calls "a perfect fish" on his right side. Van Lo's Blue-eyed Scamp also is the first foal that Parmenter raised when she began her herd.

With all of this going on, Carol Parmenter will not be resting on her laurels. She has her hands and her corrals full.