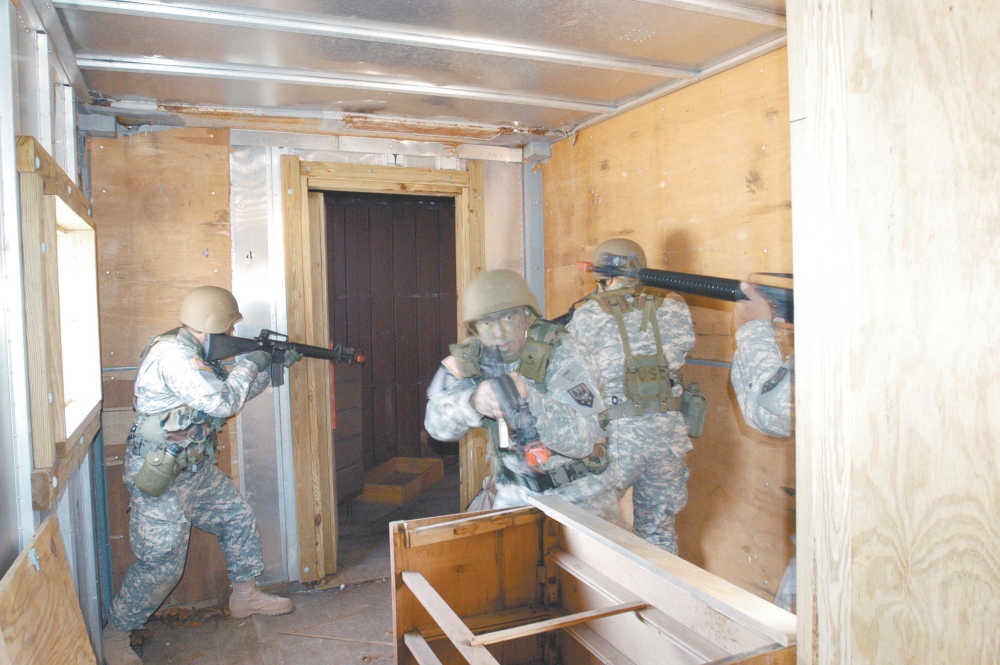 Members of the 1st Battalion, 138th Infantry move into and clear a room of enemy combatants in the MOUT training facility. --Rusty Murry/Herald-Tribune

Camp Clark, Mo. -- More than 200 soldiers from the newly formed 1st Battalion, 138th Infantry Regiment of the Missouri Army National Guard came to Camp Clark from across the state on Saturday, March 14, to take part in training in several different combat scenarios. This is the first time Missouri has had an infantry unit in more than 35 years.

The new unit, headquartered in Kansas City, has companies and detachments across the state and will have more than 800 soldiers when it reaches full strength, according to a Missouri Army National Guard press release.

The 138th Infantry Regiment began in 1832 when it was organized as a volunteer militia company called the "St. Louis Grays." In its early days, the unit earned 13 battle streamers for combat in the Mexican War, the Civil War, World War I and World War II. The unit was changed to an engineer unit in 1974 and Missouri has been devoid of the infantry since that time.

The unit was training at Camp Clark in "the first consolidated drill to increase soldier's proficiency at certain tasks," said Battalion Commander Major Kevin Fujimoto. The objective is for these soldiers "to learn to react to situations encountered" and "learn basic soldiering skills such as reacting to contact, react to enemy fire and how to enter and clear a building," said Fujimoto.

This new infantry has been well received by soldiers. "It's new. It's different," and the "unit already has somewhat of a seasoned force. Soldiers from other units have chosen to join the infantry," said Fujimoto. Now they can be in this type of unit and not have to leave their home state. This new unit will better enable the Missouri Army National Guard to fulfill both the state and federal missions with which they are tasked.

The state mission is to be ready and available for disaster relief anywhere in the state, and the federal mission is, of course, to be ready and available to defend the nation here or abroad. That fact has brought forth soldiers that are excited to be a part of the infantry. "They have a lot of pride and people want to do their part," said Major Michael Pulkabek as we were led through the woods to the MOUT or Mobile Operations in Urban Terrain site.

The site consisted of simulated housing that a soldier might find anywhere in the world. Their job was to enter the buildings, identify friends or foes and react accordingly. Each four-man was squad was briefed by the Non-Commissioned Officer in Charge, a Staff Sergeant who, due to security clearances, wished to be identified only as Sgt. Shawn. The soldiers were given some basic urban warfare knowledge before entering the structure. Things like how to "float" and be in constant position to react instead of walk and have to get ready, how to hold and keep their weapon in a ready position at all times and how to, contrary to their earlier training, point and shoot instead of take aim and shoot.

Given this bit of knowledge, the troops "stacked" outside the door of the building until given the go ahead to enter. The inside was dim; just cracks of sun and a small window offering slanting rays of dust filled light. Behind this wall an enemy, turn and fire; under that table, an explosive device; don't step on anything you can step over. Trust your team mates and follow the path of least resistance. Be sure that a dead enemy is dead. It was a lot of information to absorb in a short time.

The squad moved through the building. Slowly. Methodically. Laser sights registered hits on enemy targets and the sharp smell of gunpowder filled the cramped building. Wrong moves were corrected by Sgt. Shawn and the squad continued through the multi-level structure, clearing each room, stairway, long hall and level as they went. Sgt. Shawn told them, "It has to be a precision move to get in and engage before you can be engaged."

While the first squad went through the MOUT, the second was getting a little extra instruction and encouragement from their platoon sergeant. Gunfire could be heard in the distant timber as other squads progressed through the different training exercises. Medics were standing by just in case there were any injuries. Specialist 4th Class Luke Compton, of Nevada, Mo. was there as part of the 206th ASMC out of Springfield, Mo. The 206th provides medical support at Camp Clark and other places in the state. Compton wants to get into this infantry unit, but he was a little bit bored just watching the other troops train. There had not been any injuries nor need of their specialized services yet, but Compton said, "It's good if we're bored."

Finally, both squads cleared the building of enemy combatants and were debriefed; and the group moved on to the next training station. Establishing a perimeter first, they got their instructions from Sgt. Wallam. The small force was to proceed up a gully through the warm March woods which was thought to hold some enemy troops. Reassembling and fanning out they moved cautiously forward. Small arms fire crackled through the still afternoon, letting them know the enemy was close and that they had blundered into them.

More debriefing on things done properly and mistakes made followed, then the soldiers struck out to the next training area. It was the same scenario, but the cover was much thicker and the downhill terrain was rougher. Less than a hundred yards from the starting point, machine gun and small arms fire gave away the enemy position. The infantrymen returned fire, split their force and performed a very effective flanking maneuver. They quickly overtook the enemy troops and disarmed them.

A hasty perimeter was established, and Platoon Sergeant Randall, a 10-year veteran, checked his men for injuries and ammunition. All was well and Sgt. Wallam again debriefed the men. He had more good things to say than bad and the Alpha Co. Commander of the 138th, Captain Allen Sharrock, a sixth grade industrial arts teacher from Columbia, Mo., was pleased with the unit's performance. "For being a new unit they've been doing very well. I'm pretty impressed, actually," Sharrock said. This ended the group's training for the day and the group was led back up the hill, out of the woods.

There were several groups going through the training that day and each one of them had a member of the media embedded in their ranks. Some of them were television reporters and others were newspaper reporters. This was done "because a strong media presence serves to create a more realistic scenario for troop training, as media presence is prevalent in today's theater," according to a Missouri National Guard press release. All of the soldiers went about their business in a professional manner and acted as though the media wasn't present. Soldiers and superiors alike were pleased with the day's events.