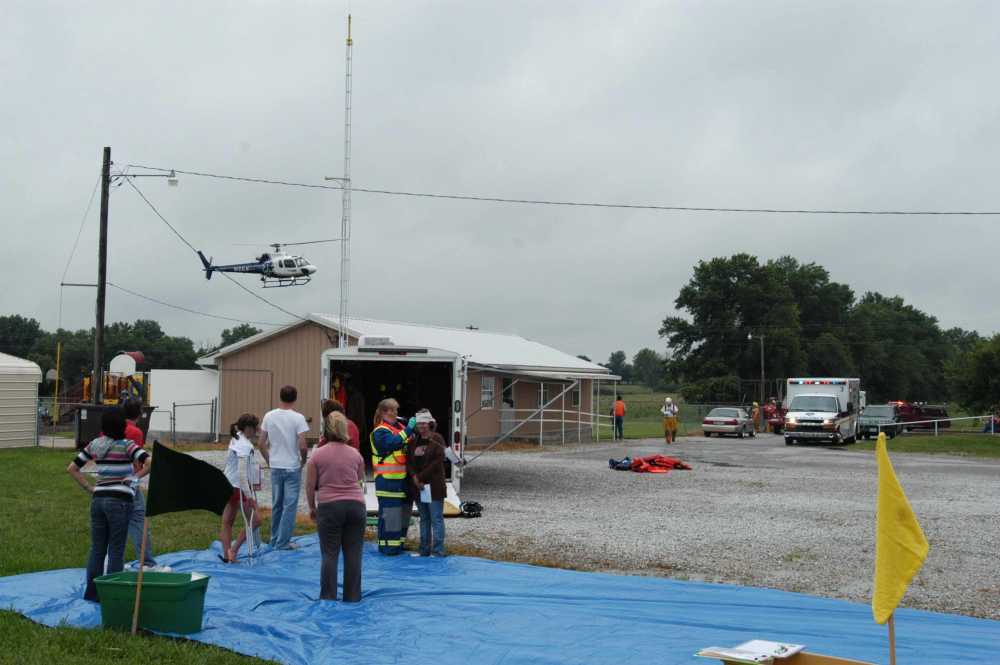 A frenzy of activity takes place during the emergency drill held at the Sheldon School on Tuesday, July 21. Vernon County Ambulance District personnel tend to the the wounded and search the structure with Sheldon firefighters as the MedFlight unit arrives to transport victims to Nevada or Lamar. -Rusty Murry/Daily Mail

On Tuesday, July 21, emergency responders from Vernon and Barton County rushed to the Sheldon School to encounter the chaos and multiple victim rescue scenario presented by a simulated gas explosion within the school. The training exercise was an emergency preparedness drill designed to measure the effectiveness of the participating agencies' response to a large scale disaster such as a chemical spill, tornado or building collapse.

The purpose of the event, according to Vernon County Emergency Management Director Dennis Kimrey, was "to work with different entities as a team to train for an actual event of this kind." Several agencies took part in the simulated rescue efforts, including the Sheldon and Lamar fire departments, Vernon and Barton County ambulance districts, the Vernon County search and rescue unit and the St. John's MedFlight crew based at the Nevada Municipal Airport. The Vernon County chapter of the American Red Cross also was at the event to distribute water and snacks to victims and emergency personnel.

Both the Nevada Regional Medical Center and the Barton County Memorial Hospital had the more than two dozen victims transported to their facilities. Nursing students played the part of the victims and those participants from Lamar were transported to the scene by Stephen Gilbert, who was in charge of the logistics for the Lamar hospital contingent. Gilbert said, "We're trying to overwhelm our system and see how they react." 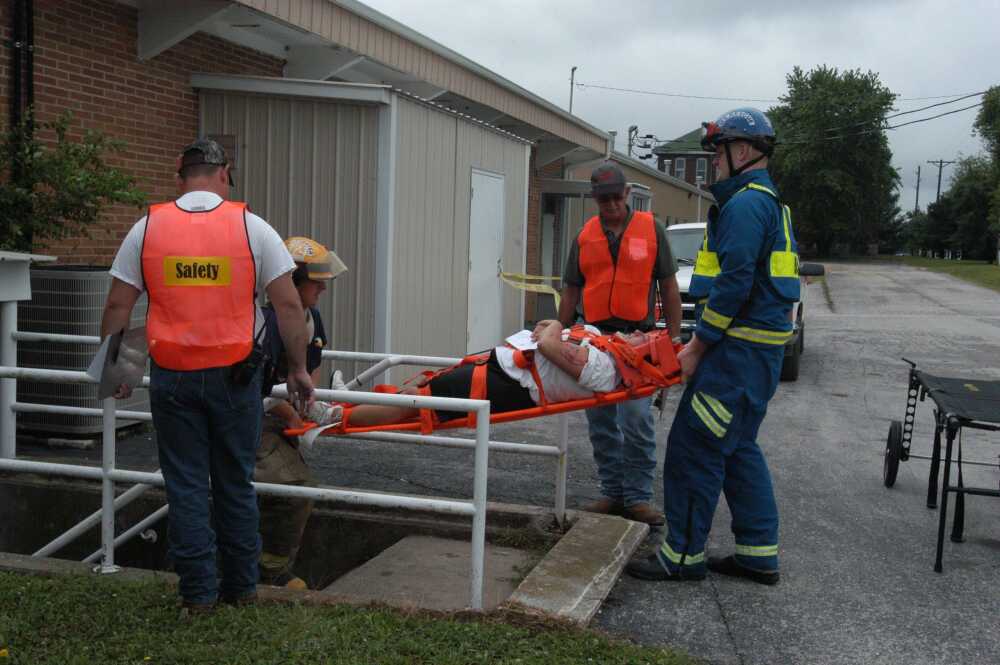 Emergency workers rescue a "patient" -- the first to be carried from the scene -- from the basement of the Sheldon school in the aftermath of a mock explosion. In a drill scenario performed Tuesday, the crews were responding to a gas explosion at the school, honing their skill in coordinating efforts with other departments and agencies on the scene.

The initial call gor assistance went out at 9:47 a.m. The first agency on the scene was the Sheldon Fire Department at 10 and at 10:03 the Vernon County Ambulance District arrived at the school. By 10:08 the first victim was led from the structure. The VCAD had its triage organized and functional outside the Vernon County EMS Mobile Response unit, and by 10:18 and things started to move smoothly, after a somewhat slow start. "It's always slow to get started, but once you get everybody here, things pick up," said Kimrey.

The MedFlight helicopter arrived at 10:25. 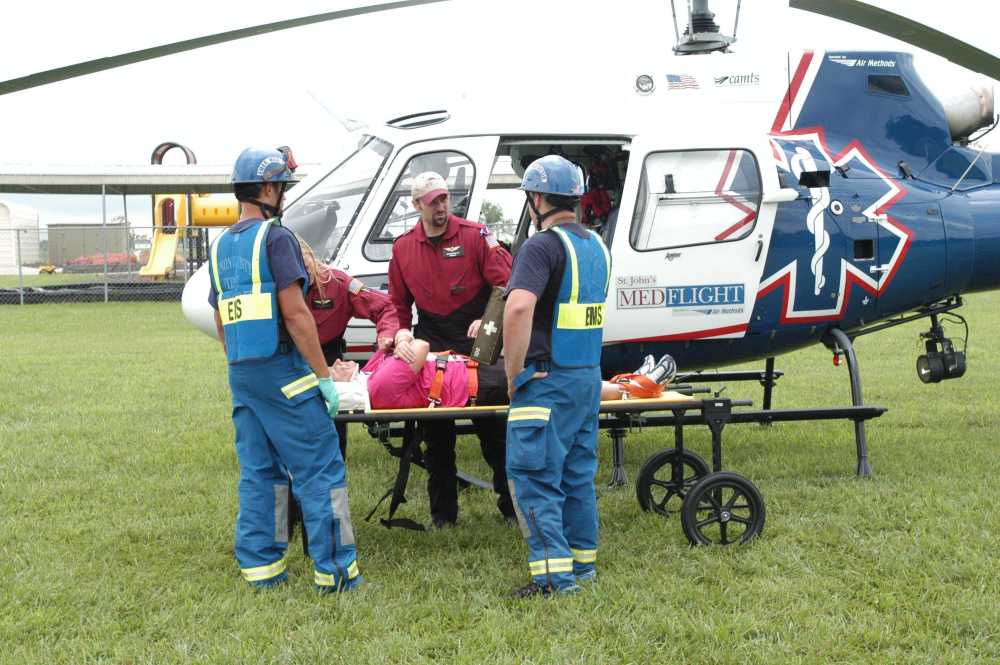 Crew from St. John's MedFlight work with other responders to prepare another mock patient for transport via air ambulance during Tuesday's disaster drill in Sheldon.

In a little more than two hours from the first call, the building had been declared safe, all the victims had been triaged and were in various stages of transport to one of the two involved facilities and the cleanup was beginning. Kimrey requested that all who could attend meet at his office at 2 p.m., for a "hot wash" or a review of the exercise while it was still fresh in everyone's mind.

All those present at the "hot wash" agreed that the drill was a success. It revealed both strengths and weaknesses in the responding agencies. Kimrey said, "I think it went well; there are a few things we could come back and learn on."

Sheldon Fire Chief David May, agreed adding that, "none of us have ever responded to anything like this." His only concerns with the morning's activities were a shortage of manpower and communication issues related to radios and shared frequencies.

Ron Brown said that he thought things went well, "regardless of maybe not what went right. It's a learning experience, so it's a win win situation."

Brown said there were a few things he noticed and could be improved on, but he still thought the event went well. Brown also mentioned communication problems as something that needs to be addressed in the future. He pointed out that communication in the building and what had been done inside could be better communicated between agencies.

Doug Hundley agreed with May and Brown saying he had never had the opportunity to participate in a drill of that magnitude. He did express some concern over some things that had happened in the past, but said people were doing their jobs and "everyone played well together." Communication and manpower popped up again when Hundley was asked what problems he identified.

When the hot wash got to Ron Nissen, he spoke right up saying "I was impressed with your response times."

He kept a detailed timeline of the entire event and commented that having the first stretchered victim out of the building in less than an hour was fantastic. He, too, made note of the fact that there was a good level of interagency cooperation. He also commented that he wished they had a Red Cross in Bates County like the one he saw here.

"They take care of people," he said.

James McKenzie of the VCAD thought the drill went well and mentioned the same strong points and weak points noticed by the evaluators. There was concern over how long a responder spent with one of the dead victims, but he explained the reasoning for the action. McKenzie was pleased with the work of his people, especially given the fact that most of them had just finished the first responders class. He mentioned a problem with a piece of gear and said the lesson to be taken from it was to "know your equipment."

One of the things discussed near the end of the meeting was trying to get everyone lined out with the communication system. Conducting a class on the radio systems may be one option.

There were some other nonverbal communication devices discussed for marking cleared rooms and other things.