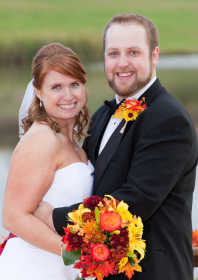 Carla Sue Fairbanks and Cody Lee Bond were married on Oct. 17, 2009, at Rosie's Cabin in Uniontown, Kan. The Rev. Randall Handly, uncle of the groom, officiated. Carla is the daughter of Charles Fairbanks, of Creighton, Mo., and the late Linda Fairbanks. Cody is the son of Eddy and Tammy Bond, of Nevada, Mo.

Immediately following the ceremony, dinner and cupcakes were served, followed by dancing. The couple honeymooned in Jamaica.