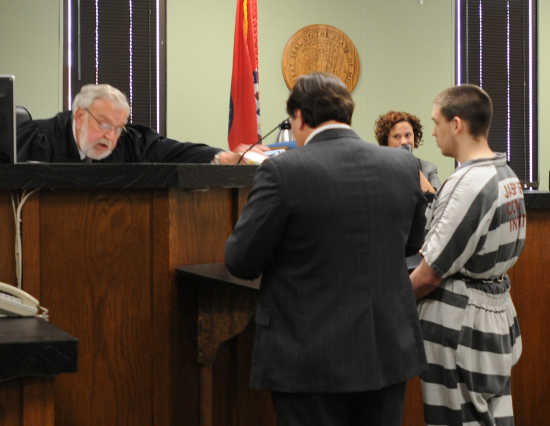 Presiding Judge David C. Dally of the 29th Judicial Circuit Court in Joplin, Mo., accepts the guilty plea of Garrett Matthew Mason, 19, of Nevada during a plea hearing held in a Jasper County courtroom on Monday. Mason pleaded guilty to two charges of murder in the second degree in the May 2009 deaths of Annie Reed and Kylie Leyva, both of Nevada. Dally sentenced Mason to two, concurrent life terms in the Missouri Department of Corrections.

Less than a month before he was scheduled to go on trial for the May 24, 2009, slayings of Nevada teens, Annie Reed and Kylie Leyva, Garrett Matthew Mason, 19, of Nevada, pleaded guilty to two counts of murder in the second degree and was sentenced to two concurrent life sentences in a Joplin, Mo., courtroom Monday.

Dally asked Mason a series of questions about his education, substance use and mental ailments which could influence his ability to make a plea. Zuzul informed the judge that a psychiatrist of their choosing had examined Mason and deemed him competent to enter a plea. Dally informed Mason of his right to a trial and told him that there is no judicial appeal of a plea of guilty.

Casting his eyes downward, then peering at the judge, Mason answered each question with a toneless, "Yes." Asked "Are you pleading guilty because you are, in fact, guilty," Mason replied, "Yes," also responding in the affirmative that he had committed two murders and understood the sentence.

Dally asked the prosecutor for the evidence the state would have used at trial. "A factual basis" coming from the evidence, Ewing said, would show that the defendant knowingly caused the deaths of the two girls by stabbing them. Ewing related to the judge that Mason and three friends -- Leviathon Dipman, Allan Harper and Amanda Sandoval -- had all been at Stockton lake for the weekend and after they returned to Harper's house, Mason made the decision to go to Reed's apartment, which was a few blocks away.

According to Ewing, "the evidence would be that this defendant was consuming alcohol" and that he had consumed psilocybin mushrooms -- a hallucinogenic substance -- before going over to Reed's apartment. The evidence would further show that while Mason was at the apartment for an hour and a half "or so" Reed moussed and washed Mason's hair and wanted to style it. At some point, "Mason secured a knife from Annie Reed's kitchen counter and stabbed Annie with the knife and cut her in the neck." He also cut Kylie Leyva on the neck, according to Ewing.

Reed managed to make her way out of the apartment and to the door of a neighbor where she knocked. When the neighbor answered they found Reed collapsed on the stoop. As the neighbor tried to render aid to Reed another neighbor joined the effort and both heard Reed say "Garrett Mason did it."

Ewing told the court that Mason fled the scene and went his to parents' house, nearby; and it's not known what happened to the murder weapon. "No weapon has been tied to this crime forensically," Ewing said.

Mason returned to Harper's house, arriving there just as the three friends were leaving. He told them he needed to change clothes and jumped in the car after throwing his discarded clothing into the trunk. Ewing stated to the court each of the three friends would say that Mason said, "what have I done?" And "you guys need to vouch for me," for the previous couple of hours. Eventually, one or more of the three noticed that there was blood on Mason's arm and he was trying to wipe it off.

Ewing said that he thinks it was Dipman who asked Mason what had happened. The three of them had Mason get out of the car -- they had a beer keg and some drug paraphernalia in the vehicle they had to get rid of before going to police.

Ewing related how then Chief of Police Gary Herstein retrieved the clothing from the trunk of the car and how that evidence was sent to the Missouri State Highway Patrol crime lab for DNA testing. Blood on Mason's clothing matched that of Leyva; and later, blood from one of both of his shoes -- seized as evidence when he was booked into the Vernon County jail -- also matched that of Leyva.

"Both of these girls bled to death," Ewing told the court. Each of the victims had suffered stab wounds that had pierced the jugular vein, he said, and a knife wound to Reed's chest had nicked her aorta.

Dally explained the state's exhibits and the plea agreement to Mason. The terms of the agreement are that in exchange for a guilty plea, Mason receives a sentence of two life sentences to run concurrently (together); and for agreeing to cooperate with the state in any further prosecutions, the two felony counts of armed criminal action were dropped. Dally asked him if he was still prepared to enter a guilty plea to which Mason replied, "yes."

Ewing said he had spoken with the parents of the victims, who wanted to move forward. He also said that Kylie Leyva's parents, who were in the courtroom, "wanted everybody that could be held criminally responsible under the law to be held responsible."

In addition to the life sentences, Dally also ordered Mason to pay a fee of $68 to the Crime Victim's Compensation Fund.

After the proceeding, Ewing said he was happy with he outcome. He said he had to balance giving up the other two charges with the wishes of the families of the victims.

Victims' family members left the courtroom visibly shaken, some of them in tears and none were willing to comment after the proceeding. Caleb Mason, Garrett Mason's father, declined comment, because he was "too emotional."

A life sentence is basically a 30-year sentence, and a defendant must spend at least 85 percent of that time incarcerated. Ewing called it "25 years and a fraction." Mason will not be eligible for parole until sometime in 2036.

Comments
View 13 comments
Note: The nature of the Internet makes it impractical for our staff to review every comment. Please note that those who post comments on this website may do so using a screen name, which may or may not reflect a website user's actual name. Readers should be careful not to assign comments to real people who may have names similar to screen names. Refrain from obscenity in your comments, and to keep discussions civil, don't say anything in a way your grandmother would be ashamed to read.
Respond to this story