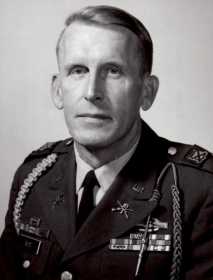 Services will be held at Grace Baptist Church, 2901 Dickens Ave., Manhattan, Kan., on Monday, April 18, at 1 p.m. Burial will be at the Kansas Veterans' Cemetery with full military honors.

He attended schools in Nevada through his junior year in high school. He graduated from high school and junior college at Wentworth Military Academy, Lexington, Mo., as a Distinguished Military Student. On Sept. 5, 1956, he married his high school sweetheart, Sherrill Jean Wise. They moved to Pittsburg, Kan., where he graduated from Pittsburg State Teachers' College in 1958 and entered the U.S. Army as an infantry officer.

His Army service included: Sixteen months in Korea, two separate years in Vietnam, and three years in Germany. He was most proud and highly honored to command A Company, 1st Bn., 18th Inf., during combat in Vietnam. His last two assignments were at Ft. Riley, Kan., as commander of the 1st Bn., 18th Inf. and Inspector General, 1st Infantry Division. He served as an instructor in the ROTC Department at Missouri University at Columbia, Mo., and three years on the faculty and staff at Ft. Leavenworth Command and General Staff College, Ft. Leavenworth, Kan. He retired, June 30, 1981, with 22 years active duty and four years as a reservist.

He was a born leader of men. He deeply cared for and respected all those under his command.

He was a dearly loved father and husband who was extremely proud of his family. His desire was to see each family member reach their greatest potential. He took great pride in their achievements. He always considered his children when making military assignment choices.

Family will receive friends at the Yorgensen-Meloan-Londeen Funeral Home, from 7-8:30 p.m., Sunday.