Elks, others come to the aid of Joplin lodge destroyed by tornado

Special to the Daily Mail 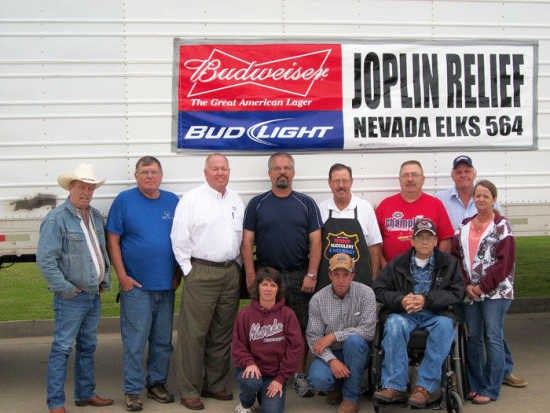 On Monday, May 23, Blaine Diehl, exalted ruler of the Elks Lodge No. 564 in Nevada, received word that the Joplin Elks Lodge had been destroyed by a tornado that hit Joplin.

He called fellow members of the Lodge to an emergency meeting to be held that evening. A 53-foot trailer was donated for use by Kendall Baker, of Johnson Grain, and within two hours the trailer was delivered and the process started. Donations started coming in that evening.

Other lodges were contacted within the district of the plans to fill the trailer and deliver it to the Webb City Elks Lodge for distribution. Cash donations also were gathered, which put Jodi Bond and Sally Jones busy shopping for items in the Nevada area. Shovels, rakes, tarps, mops, buckets, cleaning products, diapers, coolers, personal hygiene products, along with other items too numerous to mention were purchased. David Bough donated numerous coolers and the 3M Company donated pallets of dust masks, tape, gloves and personal protective equipment.

By Friday evening the trailer was nearly full and the Adrian Elks Lodge brought their items to load. Terry Dighero and Jody Norcross put together a plan for cooking and feeding the workers at the Webb City Lodge on Saturday. This cooking team made and distributed more than 300 meals that day, to the Webb City workers and workers directly in the Joplin area.

Saturday morning approximately 40 people left the Elks parking lot with Rusty Reed and his wife Rita, donating the use of his tractor to deliver the trailer with one stop at the Elks Lodge in Lamar along the way. When they arrived at Webb City the members quickly went to work cooking, unloading, sorting and whatever needed to be done. There were numerous teenagers of local Lodge members who went along to help and have been thanked for their efforts on the KOAM TV Web site, by the Webb City Lodge.