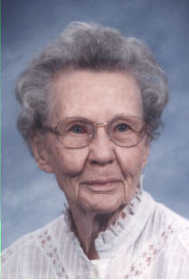 Ida was raised in Goodland, Kan., the youngest of six children all of whom preceded her in death. She was a graduate of Goodland High School. Ida received her RN degree from General Hospital in Kansas City, Mo., and passed the state board in 1937. She worked as a nurse at General Hospital before her marriage and later at St. Luke's Hospital in Kansas City, Mo. She was a longtime resident of Prairie Village, Kan., (64 years) before coming to Nevada in 2010. She was a member of the Prairie Village Presbyterian Church. Ida enjoyed traveling and fishing with her husband and playing bridge with her friends.

Survivors include one daughter, Susan Greenlund and her husband, Nelson, Nevada; two sons, Edward E. Klein and his wife, Michele, Great Falls, Mont., and Lawrence R. Klein and his wife, Dianne, Kenedy, Texas; four grandchildren, Matthew Greenlund, Andrew Greenlund, David Klein, and Nancy Nelson; six great-grandchildren; and numerous nieces and nephews. She was preceded in death by her parents; her husband; and two brothers and three sisters, whom she was very close to as she was the youngest of six.

A memorial service will be held later in October at the All Saints Episcopal Church in Nevada.

Those who wish may contribute in her memory to K.U. Medical Center, Kansas City, Kan., in care of Ferry Funeral Home, 301 S. Washington, Nevada.