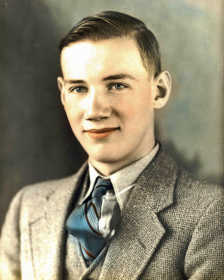 Ellis Fredrick Stoughton, 91, resident of Mapleton, Kan., left us on Nov. 24, 2011. He was born July 2, 1920, in Mapleton, the son of Fredrick Stoughton and Mary Josephine Faulhaber. He married Mary Elizabeth Blair. Most of his life was spent farming. He also carried the U.S. mail from Mapleton and Devon to Fort Scott. He would pick up the Tribune newspaper and deliver on his way home to Fulton, Prescott, Pleasanton, Mound City, Blue Mound, and back to Mapleton. If there was any daylight left, he would be back to work on the farm until dark. Although he was crippled, he wasn't afraid of work, making it difficult to keep up with him.