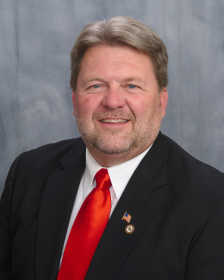 "As your District 126th Representative, I will work diligently to address legislative issues. One area of focus will be to foster an atmosphere for job growth in Bates and Vernon counties. The proposed I-49 Corridor will bring new opportunities to our area in many aspects of business and population growth." Pike said. "Economic development is essential to sustain current business and to foster future job growth. "

Pike's experience and involvement in economic development is extensive. In addition to county leadership, Pike is currently serving as president of Kaysinger Basin Regional Planning Commission, which provides seven area counties, including Vernon and Bates counties, with funding assistance and administration in areas of economic development, transportation, solid waste management, hazard mitigation, and homeland security planning. Pike is a six-year board member with Missouri Association of Counties, currently serving on the State 911 Hearing Committee in Jefferson City. Experienced in obtaining grant funding, Pike has successfully worked on multi-million dollar state and federal funding projects on the county and community level for targeted watershed projects, recycling, and city revitalization. He is currently President of the Butler Lion's Club.

"My leadership approach is based on common-sense and fiscal responsibility. Throughout my elected service as county commissioner and school district board member, I have consistently worked to maintain balanced budgets annually." Pike said.

"These are difficult economic times. Vernon and Bates counties deserve active, continued leadership that will represent individuals, communities, businesses and family farms in a conscientious manner."

Rural agriculture issues are high priority for Pike, he says. For the last five years, he has served on the National Association of Counties - Agriculture and Rural Affairs Steering Committee. He is also past president of the Osage Valley Rural Conservation and Development Board, serving 10 counties, including Bates and Vernon, regarding farming and natural resource development.

Pike, who has served as Bates County Northern Commissioner since 2000, is a successful small business and farm owner in rural Adrian where he lives with his wife, Patricia, a school counselor. They have two children, Michelle Pike and Dillion Pike (wife Channing) and two granddaughters, Isabella Bo and Josephine Harper Pike. Born and raised in Butler, Randy Pike is well known in Bates and Vernon counties for his honors as a world champion taxidermist and wood carver.