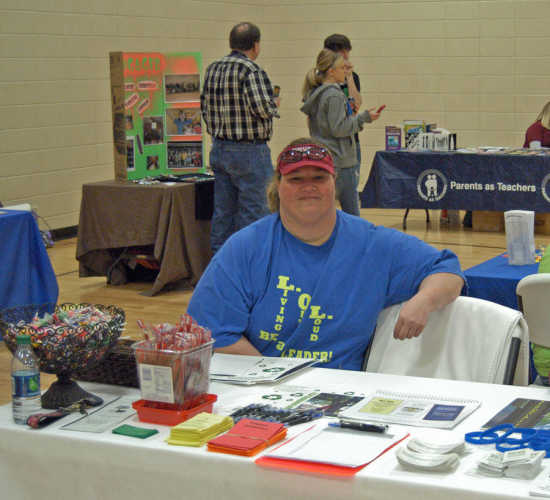 Vernon County juvenile officer Jennifer Thomas has been selected by a local group of citizens as the county resident who most emulates the Vernon County Youth Task Force March Word of the Month, cooperation.

Thomas is a lifelong resident and has been a juvenile officer in the county for 16 years. A juvenile officer's job can be difficult. Thomas said, "as juvenile officers, we're not always seen as nice people." She thinks "it's nice for people to see one of us as doing something positive in the community."

Thomas said, "I think it's an honor" to be selected. Thomas was nominated for the recognition by Nevada Middle School counselor Chrystie Braden, who said Thomas is willing to do more than her share to help students and cooperates with school administrators, teachers and counselors as needed.

Thomas leads a monthly meeting that brings all of those people and other community stakeholders together to address the needs of students in the district. Sometimes she brings a co-worker with her, according to Braden, but Thomas "is at every meeting." In her nomination, Braden said that Thomas "provides a valuable connection and creates a sense of cooperation between her office and our schools."

Thomas said, "Cooperation is a team effort" and sometimes, she has "to give a little to get a little." She said the end result is what matters even if it may not be the way she would have done things. Thomas also said that cooperation in the Nevada community is very good. "Anything I need," she said, "someone in the city will help with it."

Thomas is busy all the time. She is member of the Vernon County Youth Task Force and works with the Living Out Loud student group. On Saturday, she was at the community center for several hours and was still on the go at the Nevada/Vernon County Chamber of Commerce Pacesetter Awards banquet that evening. She is a member of the Vernon County Optimist Club and her 11-year-old son Dalton is active in 4-H, through which he shows cattle and goats. Even though a lot of the things Thomas does are not part of her job, they all take a willingness to cooperate.

A new word of the month and person who represents that word will be chosen for next month and anyone in Vernon County can nominate a person they think exhibits characteristics consistent with that word.

The guidelines are that the candidate must reside in Vernon County and the individual may be of any age. Those wishing to nominate someone should complete a nomination form by writing why they believe the nominee is a good role model and use specific examples of how the person manifests the character word of the month. From these nominations, citizens living in different areas of Vernon County will choose one of the applicants.

Forms will be available soon on the VCYTF Facebook page and at area businesses. Mail or drop off completed forms at 300 West Cherry Street, Nevada, MO 64772.

Forms also can be obtained or turned in by contacting Michelle Lockard at the Division of Social Services at mlockard128-@hotmail.com.

Comments
View 2 comments
Note: The nature of the Internet makes it impractical for our staff to review every comment. Please note that those who post comments on this website may do so using a screen name, which may or may not reflect a website user's actual name. Readers should be careful not to assign comments to real people who may have names similar to screen names. Refrain from obscenity in your comments, and to keep discussions civil, don't say anything in a way your grandmother would be ashamed to read.
Respond to this story