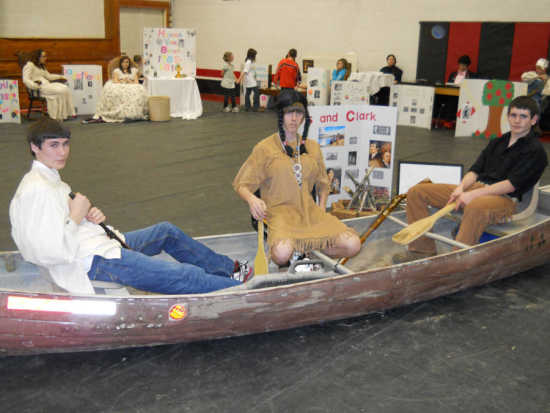 SHELDON -- Have you ever fantasized about walking around a room and meeting Thomas Edison, Abraham Lincoln, the Red Baron, Florence Nightingale, Thomas Jefferson, Winston Churchill and Yoko Ono?

Apply the imagination and an open mind and you could have done so last Friday at Sheldon High School, where the school's annual Living History Day was in full flower in afternoon and nighttime sessions.

Sixty-six students of history teacher Eileen Leininger had spent months researching characters and deciding whom they wanted to portray, then more time delving deeply into the lives of their characters and developing costumes and characteristic accoutrements for their booths. 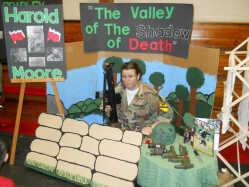 Junior Joey Clark played St. Patrick, a Catholic bishop who became Ireland's patron saint. "He was a slave who was sold to an Irish chieftain for six years," Joey said in his fifth century robe and headdress.

"I like it that he drove all the snakes out of Ireland."

Junior Sabrina Nance was athlete Senda Berenson Abbott (1868-1954), who started women's basketball. "She knew about James Naismith (inventor of the men's game) and thought there should be women teams' because girls can do as much as boys," Sabrina said.

"She taught careers at Smith College and she has inspired me to be a better basketball player."

"He also invented the phonograph, the go-cart and a lot of other things."

Nick is interested in mechanical things largely because his father, Missouri National Guardsman David Taylor, is a mechanic when stationed at Camp Clark, although he is now deployed in Afghanistan and scheduled to return home in April.

Similarly encouraged by her father William, Holly Haddan dressed as aviation inventor Howard Hughes (1905-'76) and researched Hughes' contributions to the industry. "He invented the H-1 Racer and the Spruce Goose," Holly said.

"I've been flying since I was 2 and have always loved it. I also like taking engines apart with my dad. You realize just how small you are when you see somebody down there. Nobody owns the sky."