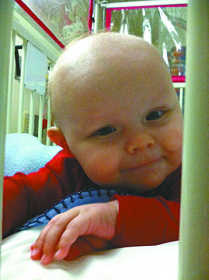 FORT SCOTT, Kan. -- Nine-month-old Ty Lundberg has been through a lot in his young life and local groups recently stepped up to help the child's parents handle costs related to his treatment.

The Elks Lodge and the Modern Woodmen of America, along with the Care to Share cancer support group and The Sharing Bucket, recently held a chicken noodle lunch and dinner for Ty and his family.

The fundraiser brought in $5,758 for Ty's parents, Josh and Jacki, to pay for expenses related to the youngster's battle with neuroblastoma -- a cancerous tumor that develops from nerve tissue and occurs in infants and children -- which he was diagnosed with at 3 weeks old.

Elks member Linda Findley, a longtime friend of the Lundberg family, organized the fundraiser, saying she "knew they needed help." She asked the Care to Share group if they were interested in getting involved.

"It went great," Findley said. "I really want to thank Joylynne Stainbrook and Scott Gander with Modern Woodmen of America. They both came out and helped serve. The Care to Share and Sharing Bucket are just wonderful. They helped get the word out. It was a wonderful turnout and very successful."

The Modern Woodmen organization matched dollar-for-dollar the amount raised through the fundraiser, up to $2,500. Organizers said the event itself raised a little more than $2,500.

"Those funds go to him," Care to Share member Lavetta Simmons said. "The Sharing Bucket helped with serving, delivery and support."

Findley said at least 500 people were served at the fundraiser. Meals were available for $5 each. Many people made monetary donations rather than purchasing meals.

"It was a wonderful thing," Care to Share member Joy O'Neal said. "People don't realize what a loving, caring, sharing community we have."

Ty recently completed his eighth round of chemotherapy -- a total of 29 doses -- and has also undergone several surgeries and procedures.

Jacki said she and her husband knew something was wrong while she was still pregnant with Ty. An ultrasound at 36 weeks showed that Ty had a swollen right kidney. His parents thought it was a typical kidney ailment. An ultrasound conducted immediately after Ty was born showed that the kidney had gone from mild to moderate swelling.

A large tumor the size of an orange was found under his right kidney at Children's Mercy Hospital in Kansas City, Mo. Jacki said several experts were trying to determine a diagnosis, but none was forthcoming.

"They were calling in extra people," she said. "We thought we don't know what it is or what's going on. We didn't come home for 20 days. And then we had no answers for three days."

Jacki said when the family brought Ty home from the hospital, he couldn't eat immediately. Then, there was more waiting to schedule a biopsy. Jacki said she and her husband had a hard time adjusting to seeing their son in the Cancer Unit at Children's Mercy.

"It was surreal to go from the surgical floor to see him sedated and waking up in a cancer unit," she said. "To see all those kids who don't have any hair and IVs in them. We thought 'that's not where we're supposed to be. Only adults get cancer.'"

The family spent the first four days with a "nurse in and out of his room constantly," Jacki said.

"We got the diagnosis and started chemo within the next few days," she said. "We thought 'Why are we here? It doesn't look like he has cancer. How can you have cancer at three weeks old?'"

At first, Ty went through four cycles of chemotherapy, but the tumor was getting a little bigger. The decision was made to repeat four more cycles, but increase the dose and complete the chemo in a different order. The tumor was reduced in size by 86 percent and chemo was stopped for a month, Jacki said.

Ty was then scheduled to have as much of the tumor, which was encasing his abdominal aorta, removed as possible. Doctors left parts of the tumor that were too dangerous to remove, but were able to take out 9 percent of what remained. Less than 5 percent of the original tumor is left, Jacki said.

Jacki said despite everything, Ty is happy and otherwise living the life of a normal baby at home. At first, he did not have any hair on his head, but it is growing back.

"If you didn't know, you wouldn't think he was sick," she said.

Jacki said she is thankful for all the support the family has received as they search for a cure.

"Everyone involved in the (Care to Share) group has been an angel," she said.

The money from the recent fundraiser will help Jacki, who works two days a week as a nurse in Nevada, Mo., pay for travel expenses to take Ty to Kansas City three or four days each week for his appointments, and other costs.

"Plus, every week there's a new bill, something else comes in the mail," she said. "To not have to worry about the little things they take care of is more of a relief than you could ever imagine. The entire community has been extremely giving."

Doctors have considered Ty's prognosis favorable, and the treatment process has removed as much of the tumor as possible.

"There's still a few cells in there," she said. "That's the purpose of the labs and scans. They showed they are in a transition stage. If we continue to see them go down today, we'll get a new diagnosis and see if we're on the path toward remission ... We're in the beginning stage of figuring out if it's continuing to go down."

Jacki said the plan is to watch Ty's right kidney very closely because doctors had to sever one of three major arteries to that organ during surgery.

Ty will have to go for labs and scans each month for two years, and then eventually once every six months, then yearly for the rest of his life.