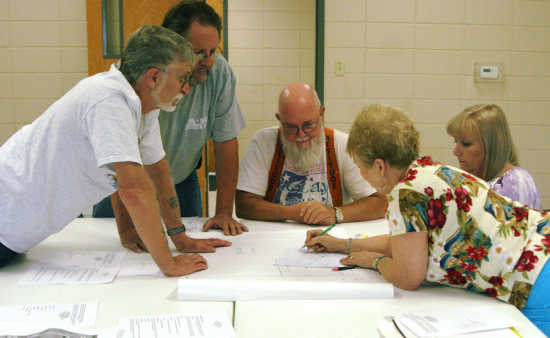 Jim Overton, far left, Steve Brooks, both from the Elks, Warren Schooley, Shirley Ann Bastow, park board, and Dana Redburn, parks department director, look over a hand-made drawing of a design for the military themed park to be located in Davis Park on Centennial Boulevard.

The plans for developing a joint Elks-Nevada parks department military-themed park project at Davis Park and on Elks property are still evolving, but on Tuesday the Davis Park subcommittee of the parks board developed a preliminary drawing for the part in Davis Park.

Shirley Ann Bastow told the committee that she originally wanted to put bronze statues in the park representing the Army, Navy, Marines, Air Force and Coast Guard. After researching that she found that they would have cost about $25,000 each, and they would not have enough money for that.

As an alternative, she told the committee that she thought they could have a nice monument made of Carthage limestone that would consist of five limestone pillars with the emblem for a branch of the military engraved on each pillar, with a limestone capstone tying the pillars together.

"We want it to be really classic and we have to do it for a reasonable budget," Warren Schooley said.

"We might be able to put an eagle on top," Bastow said.

In addition to the monument for the veterans, the current plan calls for moving the caboose from Earp Park to Davis Park and painting it in military colors to represent the troop trains that brought U.S. soldiers and Italian POWs to Camp Clark during World War II.

Bastow said that some local veterans objected to including the caboose in the display and to allay their concerns she suggested that they be invited to the June 26 meeting to discuss their concerns.

As part of the theme the committee would also like to put some piece of military equipment in the park. The committee had originally considered some type of aircraft, but the requirements from the military were too costly.

So, now they are considering something like a howitzer or other small artillery piece.

In addition to the military items, the committee plans to retain the playground equipment as well as the overnight camping. Davis Park is the only city park that permits overnight camping. All the other city parks are closed between midnight and 6 a.m.