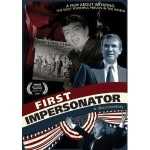 By Lynn A. Wade

Impersonating a president can't be a simple task, but Nevada's own Brent Mendenhall makes it look easy. Monday night, at a screening of "First Impersonator," the story of Mendenhall's journey to develop, perfect and put to work his uncanny imitation of George W. Bush, will unfold for viewers.

Doug Harper coordinated the screening -- set for 7 p.m., Monday, Aug. 6, at Take A Break Java Den on U.S. 54 Highway (coincidentally located in the building just west of Mendenhall's restaurant, Del-Way Drive-In). Harper said Mendenhall is an important figure in the 2008 Kansas City Jubilee Film Festival award winning film, directed by Chad Friedrichs. The stories of other impersonators, like Vaughn Meador, who started it all in 1962 with his impersonations of then-President John F. Kennedy, are also intertwined into the film.

"It's really a neat story," Harper said, "It follows him (Mendenhall) from the opening scene." Most people, Harper indicated, probably don't know the extent of Mendenhall's accomplishments as a presidential impersonator and believes the screening will give people a chance to appreciate all he's done, and to experience the entertainment value of Mendenhall's presidential imitations as well.

"Casino Jack," another movie in which Mendenhall's featured in a few scenes in the role of Bush, will be screened at 9 p.m. The 2010 film about a Washington, D.C., lobbyist starred Kevin Spacey, Barry Pepper and Kelly Preston. This film is rated R.

But between the two features is another special presentation that Harper says might be the most fun of all -- television commercials and scenes from shows made in Japan and other countries, in which Mendenhall appears.

One, Harper noted, is a segment from a Japanese show similar to MTV's "Punk'd" in which a woman believes at first that she's actually meeting the President of the United States.

Other segments Harper thinks the audience might enjoy are the 15-second ads -- that length is prevalent overseas -- that capitalize on Mendenhall's resemblance to the former president.

Mendenhall plans to attend Monday's screening. Seating is limited at the Java Den's new digs, so those who want a good seat are encouraged to come early.