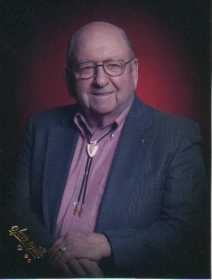 David Frank Adams, 90, formerly of Liberal, Mo., passed away on July 13, 2013, at Barton County Memorial Hospital, in Lamar. He had resided at Truman Healthcare Center in Lamar since June 2010. Frank was born on Feb. 1, 1923, at Liberal, Mo., to Timothy Keller Adams and Flora D. Ziegler Adams.

Frank grew up in the rural Liberal and Bronaugh areas with his four brothers and three sisters and graduated from Bronaugh High School in 1940. On April 15, 1944, he married his high school sweetheart, Norma Elizabeth Whiteside, at Fort Scott, Kan. On Dec. 16, 1946, their only child, Patty Sue, was born. Patty was killed in an auto accident on Dec. 4, 1961. Her death devastated Frank and Norma, but their strong faith carried them through 57 loving years of marriage until Norma's death on July 8, 2001.

From his maternal side he was of American Indian heritage and was a tribal member of the Citizen Potawatomi Nation of Shawnee, Okla. His maternal grandmother was Mary Eleanore Bourassa Ziegler, daughter of Jude W. Bourassa.

Frank was a veteran of World War II, serving in the United States Navy from May 26, 1944, to Jan. 19, 1946, as a radarman and mail clerk aboard the Navy ship LST 244. His ship was involved in the invasions of the Philippines, Leyte Island, and Okinawa.

After returning from the service, Frank worked as a farmer, carpenter, truck driver, and school bus driver in the Bronaugh area. In 1961, Frank and Norma purchased the Liberal lumber yard where they worked side by side for 27 years. They sold the lumber yard in 1988 and retired.

Frank loved the Liberal and Bronaugh areas and was very active in community affairs, serving on the Liberal city council several years and as mayor two years. He was an active member of the United Methodist Church of Liberal. Other memberships and interests were VFW, Masonic Lodge, Shrine, Lions Club, and Senior Center. He was someone others could call on when help was needed.

Memorial contributions may be made to the United Methodist Church of Liberal, Worsley Cemetery, and Liberal Senior Center in care of Konantz-Warden Funeral Home.

Services, including Masonic rites, will be Wednesday at 10 a.m., with visitation beginning at 9 a.m., at Konantz-Warden Funeral Home, 1301 Gulf St., Lamar. Interment will follow at Worsley Cemetery, Bronaugh, Mo.