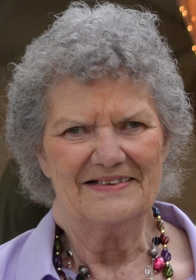 Joy Ann Williams Taylor was born on Oct. 12, 1934, to Gertrude Augusta Ferrell Williams and Walter Harvey Williams. She was born in Oklahoma and moved to Milo, Mo., in 1945. She graduated from Nevada High School, class of 1952 and attended Pittsburg State University in Kansas. She met Roy Eldon "Bud" Taylor in 1951 at the roller skating rink. Bud was drafted to Korea in 1953 and upon his return, they were united in marriage on Oct. 19, 1954, and went on to have four children together.

Joy worked for more than 20 years at the Nevada Habilitation Center and retired from there in 1993. She went back to work part-time at Denman Land & Title/Bowman's Vernon County Title Co., until she had to quit due to illness.

Joy spent all her life in the Nevada area and was an active member of the United Methodist Church. She was a member of United Methodist Women and worked on the annual bazaar. When her daughters were young, she served as a Mother Advisor for Rainbow Girls. She was also a member of the Eastern Star, Missouri Quilt Guild and the Bushwhacker Quilt Guild. She bowled for several years with a Monday night women's team and was a sports enthusiast. She loved to watch football, basketball, and baseball, and cheered on her children and grandchildren. She was known to show up late to a family gathering if there was a really good ball game on television. She played a mean game of dice and enjoyed playing cards as well. She loved to read, scrapbook, and quilt. Her love for quilting and for her family and friends was demonstrated by the beautiful quilts she gave as gifts to celebrate birthdays, weddings and new babies.

A graveside committal service will be held at 11 a.m., Saturday, Aug. 24, at Deerfield Cemetery, Deerfield, with the Rev. Linda Pagel officiating. Memorial donations may be made in her memory to Vernon County Cancer Relief Fund or the United Methodist Women in care of Ferry Funeral Home.