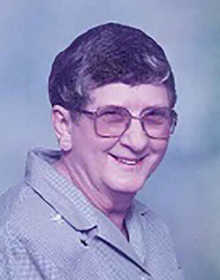 Betty graduated from Bronaugh High School in 1947. She spent her life as a homemaker who loved her yard and flowers. But most of all she loved her family, especially her children and grandchildren.

A graveside service will be held at 2 p.m., Friday, Nov. 8, at Shiloh Cemetery, Liberal, Mo., with the Rev. Bill Smith officiating under the direction of Ferry Funeral Home, Nevada.

Contributions may be made to the Shiloh Cemetery in care of Ferry Funeral Home, 301 S. Washington, Nevada.