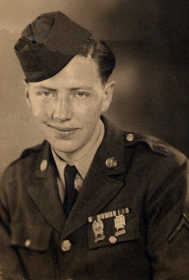 Leroy was born on July 13, 1924, to Royal and Violet Beshore. He grew up on his family's farm near Rich Hill, Mo. Shortly after beginning college he was drafted into the army during World War II. He served with the Army Signal Corps from the invasion at Normandy until armistice in Germany. After the war, he returned to work on the family farm. While his original intent at college was to become a doctor, he often stated that he had seen enough death during the war and did not return to his studies.

He did find employment in the medical field assisting patients at the Nevada Habilitation Institute. In 1976, he opened Circle B Western Wear Store in Rich Hill, Mo., and later another location in Butler, Mo. He ran his business until he retired in 1992.

Leroy spent his entire life around the Rich Hill area. He loved the outdoors and could often be found hunting or fishing on his farm outside of town.

The funeral is scheduled for 2 p.m., Saturday, Jan. 25, at Heuser Funeral Home, in Rich Hill. The family will receive friends from 1 p.m., until service time. Graveside services will follow at Oak Hill cemetery in Butler, Mo.