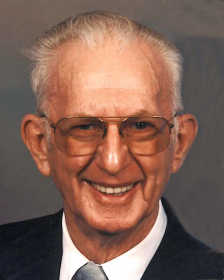 He was a 1939 graduate of Hume High School and had attended Drahn Business College in Springfield, Mo. He served his country honorably in the U.S. Army with the 316th Field Artillery Battalion, 81st Infantry Division (Wildcats) in the Western Pacific and was discharged honorably on Jan. 17, 1946. He was married to Anna Mae Novak of Cleveland, Ohio, on Nov. 22, 1947, a union lasting 63 years.

He and his parents owned and operated the Standard Oil Company Service Station in Hume, Mo., until 1961, when he moved his family to Fort Scott, Kan. While in Fort Scott, he was employed by Bryden's Automotive Supply and then Abts Automotive Supply of Iola, Kan. He finished his working career with Ray Shepherd Motors and retired in 1984. He was a member of the First United Methodist Churches of Hume and Fort Scott. He was also a member of the Masonic Lodge and the Order of the Eastern Star of Hume and Butler, Mo., receiving a 50 year recognition status. He loved his family, fishing, golfing, woodworking and bowling.

Survivors include a son, Robert Shaw and wife, Dianne, of Nevada; a daughter, Marilyn Hile and husband, John, San Ramon, Calif.; and two grandchildren, Amanda Lybeck and husband, Ryan, Oronogo, Mo., and Brian Shaw and wife, Kim, Olathe, Kan. He was preceded in death by his parents; a sister; and his wife.

Words of remembrance may be submitted to the online guestbook at www.cheneywitt.com.