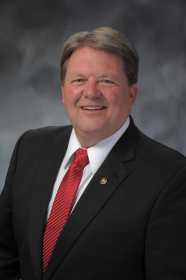 Randy enjoyed two very rewarding career fields. He developed his interests in nature and different art mediums to become a master taxidermist and wood carver. Earning top recognition at the 1988 World Taxidermy and Wildlife Art Competitions, Randy won first place in "Best in the World Fish" in the Fish category and second place in Deer Head Division at the Master Level categories. With his knowledge of animal anatomy and attention to detail, his work evolved from taxidermy to include wood carving and sculpting. He won many national and state honors for his work and went on to teach and judge nationally. Many are the proud owners of his detailed taxidermy mounts and intricate wood carvings. His family especially enjoyed the hand carved Santas he made and gave each Christmas.

Randy was preceded in death by his father, Wesley Pike; and grandparents, John and Mabel (Spain) Pike and Harvey and Cecilia (Steffen) Carroll.

Funeral services for Representative Randy W. Pike will be at 11 a.m., Thursday, Sept. 25, at Mullinax Funeral Home, in Butler, Mo., with the Revs. John Bolderson and Chris Snyder officiating, with special words from LTCOL Barney Fisher, USMC (Ret.), and Dennis Page. Visitation will be Wednesday from 5 to 8 p.m., at Mullinax Funeral Home. Contributions are suggested to the Representative Randy Pike Memorial Scholarship for Students of Bates and Vernon counties. Burial will follow services in Crescent Hill Cemetery, Adrian, Mo.

Messages of condolence for the family may be left at www.mullinaxfuneralhome.com.