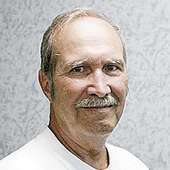 Ken White/Special to the Daily Mail/ Charlie Campbell, with a Bull Shoals bass caught on a Zara Spook. With all the zebra mussels in the lake, Campbell advises anglers to fish in the shade to prevent bass from spooking in the clear water.

Charlie Campbell, of Forsythe, is a veteran angler at Bull Shoals Lake.

Due to the recent high water levels at the lake, he hadn't fished it for awhile, but now that the water levels have fallen to a level that makes launching a boat easier, Campbell decided to go bass fishing. When Campbell and his wife, Wanda, started up the lake near Beaver Creek, they were shocked by a sight they had never before seen.

The nearby bluffs appeared black as though they had been painted. At closer inspection it showed the fallen water had uncovered many millions of zebra mussels that covered the rocky bluff as well as any brush in the water. Campbell said, "The nearer I got, the sicker I got. A fisherman will have to change the way they fish the lake now. The mussels have made the water much clearer so anglers need to wear clothes that wouldn't spook the fish while fishing in the shade, if possible.

"As for the line you had used for fishing, it might need to be changed. When I got home from fishing, I looked at my lines and the last 20 feet of all the lines I used you could see all the scrapes, no nicks or cuts, just scrapes. So if you hook a fish and jerk the line, it will brake right away. If you are fishing in zebra mussel infested waters, you might use a lure you wouldn't mind losing. I know because a lure I was using was a valuable Zara Spook that I had caught a lot of bass with.

"A big bass hit that lure, but the line broke, causing the lure to hang up on a zebra mussel infested brush-pile and I couldn't retrieve it no matter how hard I tried."

When asked what the solution to the problem might be, Campbell replied, "We can't drain the lake so we need to learn to fish the way it is. Anglers might need to change the line they use. When using crank-baits, they might try a 20-pound test braided line that has a 6-pound diameter, which means the line will still go down deep. It doesn't work on top water, when I use a Zara Spook it doesn't give any. When you set the hook, remember there is no stretch to it. You can break a 20-pound test line just by jerking the line. Also, should you get hung up on some brush, don't pull with the reel because it will only hurt the reel."

Zebra mussels on a stick.

The zebra mussels are native to Russia and were first discovered in North America back in 1988. Since then, they have spread throughout the Great Lakes into water connected to the Mississippi River System. In the spring of 1999, they were discovered in Missouri at the Meramec River south of St. Louis and have spread to other Missouri waters.

Female zebra mussels can produce as many as 1 million eggs per year. In three weeks they clump together and cover rocks, rubber, wood, boat docks, and boat hulls.

The mussels filter the water as they feed on plankton. They can filter one quart of water per day, but the short-term benefits don't override the long-term impacts.

Adult zebra mussels can live for four to five years and can live out of water for up to 10 days.

Boat engines overheat due to zebra mussels clogging cooling water inlets. Even beaches are affected. The sharp-edged shells along swimming beaches can be a hazard to unprotected feet.

The potential for these aquatic hitchhikers is very high. Prevention is a key to at least slow down their progress. Taking measures to make sure you are helping, boaters need to inspect their boat before moving from lake to lake or river to river.

Overland transport by boats, trailers and aquatic plants pose one of the greatest risks for spreading these mussels. Boats that have been moored or stored for a day or two in zebra mussels water could have these hitchhikers attached to the hull or even anchor chains. Boats that been in infected water only for a day are less likely to transport adult mussels. They can survive in bilge water, bait buckets and engine cooling water systems and livewells.

However they will die quickly if left in the sun or blow-dry out as the boat is traveling home.

Kenda Flores, Aquatic Habitat Specialist for the Missouri Department of Conservation, said, " Most of our big impoundments now have zebra mussels including the Lake of the Ozarks where they were brought in by big boats that entered the lake. There have been many attempts to rid the waters of the invasive species, but so far nothing has worked. The best hope is prevention to keep them from spreading. Boaters need to be sure there are no zebra mussels on or in their boat before moving them to other waters. They will attach themselves to anything, including life jackets and bait buckets. The don't tolerate heat, but can survive in cool-moist conditions for some time."

Campbell said, "The zebra mussels are here and we must try to find a solution to stop the damage they do to boaters and fishermen."

Meanwhile, we need to prevent the growth of these aquatic pests into other waters. Today the fishing in lakes like Bull Shoals is still good, but who knows what tomorrow might bring?