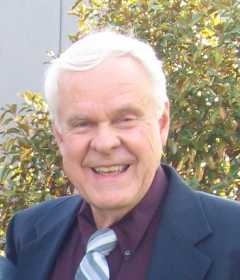 Richard Harrison Jones (Dick Jones), 74, died at his home in Joplin, Mo., on Dec. 5, 2015. Richard was passionate about God's Word and discipling others. He recently authored a book titled "The Bible: The World's Most Misunderstood Book." He was a very humble man, and a wonderful husband, father, and grandfather. He was born on July 20, 1941, to Ernest and Betty (Scott) Jones.

He is survived by his wife of 54 years, Fran (Westhoff) Jones; his three children, Corrina Unal of Duncanville, Texas, Victoria Helms of Redmond, Wash., and Robert Jones of Joplin, Mo., and their families; seven grandchildren; five great-grandchildren; and his brother, Dr. Ron Jones and wife, Valo, of Nevada, and their family.

He retired from the U.S. Air Force, then worked as the KNEM radio news director in Nevada, and most recently retired from Wal-Mart in Bentonville, Ark. His family is planning a celebration of life memorial in Spring 2016.