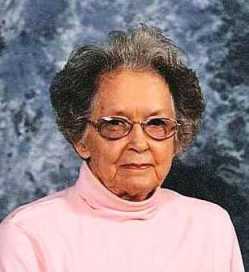 Frieda, along with her family, came to Vernon County at the age of 16. She attended school in Nevada and graduated from Nevada High School. Following her marriage she and her husband lived in Augusta, Kan., from 1955 until 1973. At that time they moved back to the family farm in Deerfield where Frieda continued to reside until she moved to Nevada five years ago. Frieda was a member of the Seventh Day Adventist Church and a longtime member of the Ellis Domestic Science Club.

Survivors include her children, Joy Edwards and her husband, Gary, Wamego, Kan., Bruce Pettibon and his wife, Beth, Moundville, Mo., Stephen Pettibon and his wife, Sandra, Nevada, Loretta Doubledee, Grain Valley, Mo., and Luanne Palmer, Nixa, Mo.; 17 grandchildren; 22 great-grandchildren; and one sister, Janet Birkestrand, Nevada. In addition to her husband she was preceded in death by one sister, Madeline Rinehart.

Funeral services will be held at 1:30 p.m., Monday, Jan. 11, at Ferry Funeral Home, in Nevada. Interment will follow in Deerfield Cemetery, Deerfield, Mo. The family will receive friends from 3 to 5 p.m., Sunday, at the funeral home.

Contributions may be made in her memory to the Ellis Domestic Science Club or the Seventh Day Adventist Church in care of Ferry Funeral Home, in Nevada.