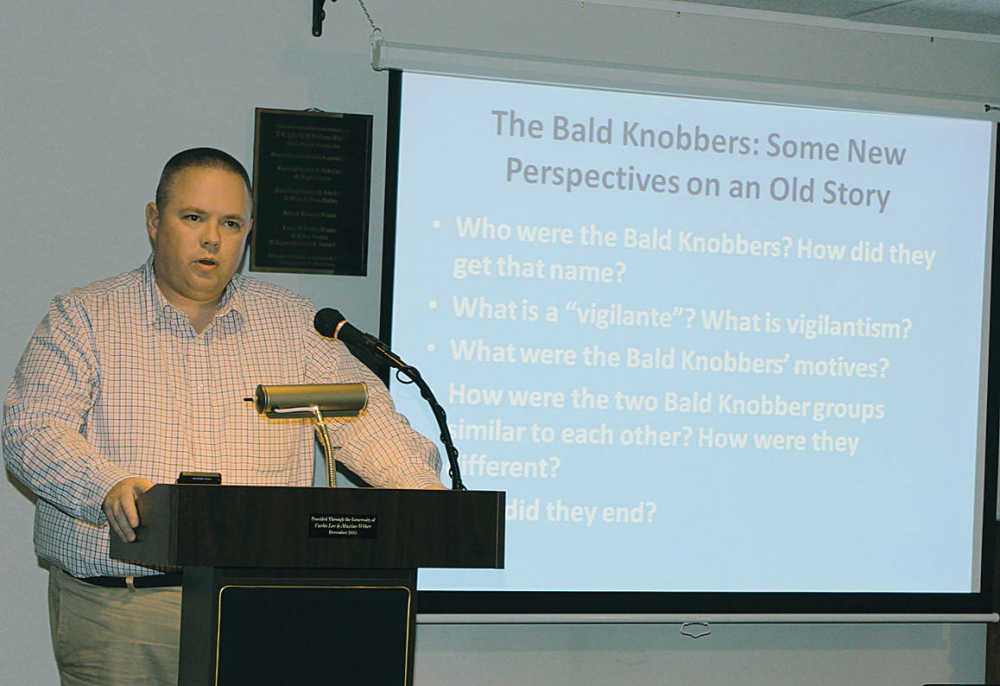 Matthew Hernando talks about his book on the Bald Knobbers from the new podium donated by Curtis Lee Weber to the Bushwhacker Museum. Gabe Franklin/Daily Mail

Dr. Matthew J. Hernando delivered a riveting rendition of the Bald Knobbers to a full house at the Bushwhacker Museum Sunday.

Hernando explained the origins, life, and deaths of the Bald Knobbers vigilante groups from Taney and Christian counties during the post-Civil War era.

Originally called the "Committee for Law & Order" the Bald Knobbers got their name from their first meeting place on a barren hilltop named Snaps Bald. The groups original purpose was to drive out the riffraff that had inundated the area during Reconstruction. A typical form of warning would come in a bundle of sticks left at the undesirable's door. The number of sticks was the number of days that person had to get out of town of face stiffer consequences. Despite their usual tactics being non-violent, violent crimes committed by their members eventually led to the Bald Knobber's downfall. Many of the members were prominent in local society and politics.

Hernando teaches History at Ozark Technical College at its Hollister, Mo., campus. He has studied the Bald Knobbers extensively and authored a book entitled "The Bald Knobbers: Some New Perspectives on an Old Story."

In other business, Museum Coordinator Will Tollerton reported that in 2015, the museum hosted 800-plus paying visitors throughout the year, approximately 600 visitors during Bushwhacker Days, and 200 fourth-grade students for the annual History Day. Of particular interest was a donation by Curtis Lee and Maxine Weber. The Webers donated a new podium for use by the museum and the library.

Other events in 2015 included two bus trips to historical sights around the state, one a former state penitentiary and the other to the psychiatric museum in St. Joseph. The first annual Night at the Museum event consisted of tours, a raffle, and other events; brought in $3,500. The second annual Night at the Museum is scheduled for March 8, from 5 p.m. to 7 p.m. at the museum, 212 W. Walnut St. Ticket sales are limited to 200 due to space available.

More information on the Bushwhacker Museum and the Vernon County Historical Society can be found at http://www.bushwhacker.org.