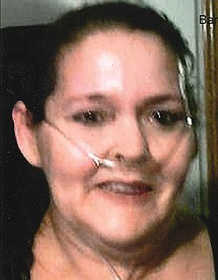 Barbara Jean Stone, 58, of Liberal, passed away Friday, April 15, 2016, at Landmark Hospital, in Joplin, Mo. She was born March 18, 1958, in Sonoma Valley, Calif., the daughter of Harold Edmond and Joyce Ann (Figueiria) Tinker.

Barbara was raised in California and later moved to Oregon, then Texas and has been in this area for the past 30 years. Barbara was a CNA and worked in the health care industry in Lamar and surrounding area. She was married to Ralph Steel, Bill Schleappe, Jim Hackett and Harry Stone who preceded her in death.

Barbara was a devoted mother, grandmother, and sister. Her greatest love in life was being with her family. She enjoyed doing arts and crafts, camping, fishing, playing board games with her grandchildren, traveling and going to the casino. She will be remembered as a person who was unselfish and always put others before herself.