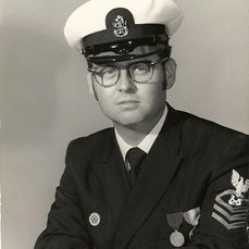 Danny grew up in Florida and Lawton, Okla. He joined the military in 1964 at the age of 17. He served faithfully in the United States Navy for 21 years. His Navy career took him to six of the seven continents and to his most important assignment in Scotland in 1966, where he met and married Patricia Cunningham, the love of his life, on Dec. 3, 1966. The couple raised three children and lived in Virginia, Washington, and California before he retired to Missouri in 1984. He spent the next 32 years in Metz, Mo., with the best catch of his life.

Danny enjoyed woodworking, fishing, hunting, shooting his guns, barbequing and keeping up his yard. He was a professional jack of all trades, master of none.

He was very proud of his children, grandchildren and great-grandchildren who, so far, have continued his love for his country and the legacy of military service. He is already greatly missed, but his family has the peace and comfort of knowing that he had a personal relationship with Jesus Christ and we will meet again one day.

A memorial service will be held at 11 a.m., Wednesday, June 15, at Ferry Funeral Home, Nevada. Friends may call now and until the hour of service at the funeral home.