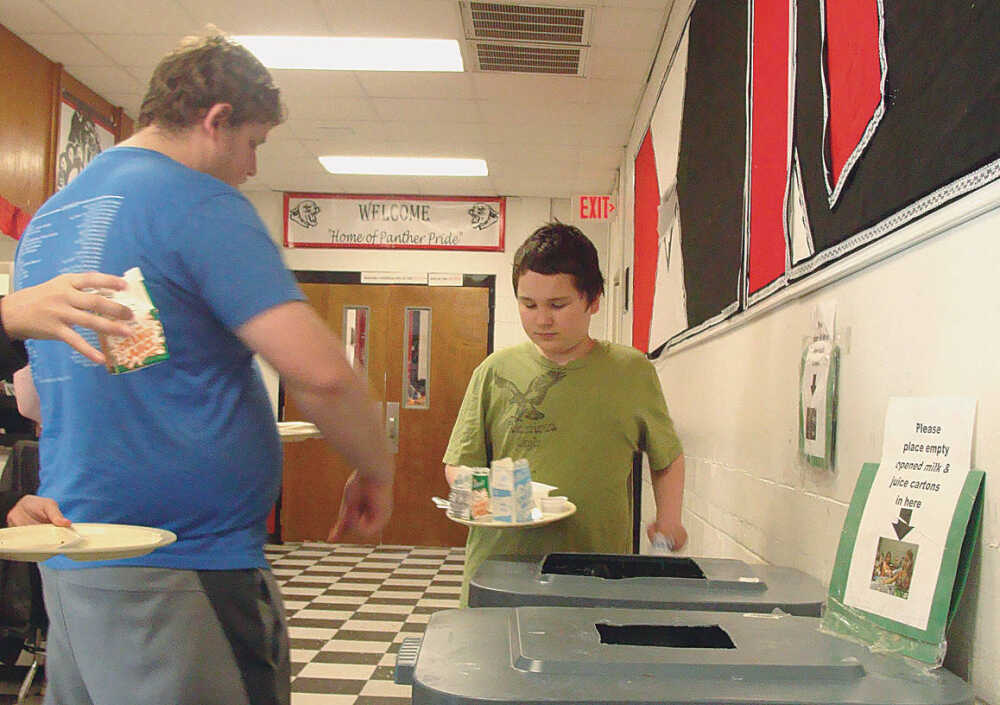 With the start of summer school on June 6, Christy Lockard, business teacher and FBLA advisor, implemented the next phase of a recycling program. The Sheldon FBLA and the city of Sheldon have been working together to promote recycling at the school and in the city of Sheldon for about 2 ˝ years so far.

The school has seen a large reduction in their trash waste. Usually on a school day there are one to two bags of trash (which includes the milk and juice cartons, the food waste and regular trash) for breakfast and three to four bags of trash (which also includes the milk and juice cartons, food waste along with regular trash) for lunch. Since implementing the next phase of recycling, the school has only had one bag of trash each day -- which includes breakfast and lunch, one bag of milk cartons (which have to be completely opened and then run through the dishwasher), and about third to a half a bag of food waste. "It is amazing and the students are learning the procedures and think it is great!" said Lockard.

Lockard used the three weeks of summer school to start this and work through any difficulties they found, so that the school could make changes as needed. Currently the school is in its second week and things are going pretty smoothly. They plan to implement all the new recycling for everyone involved in the school when the new school year begins.

Each student has learned to open their milk or juice cartons while they are still seated, then come up to the bins and dump any left-over juice or milk into the specific bin and put their empty, opened milk cartons in the specific bin for them. Then the food waste goes in another bin, and their napkin, straw, and any other trash they might have goes into the regular trash bin. It has been a bit of a change for everyone but students have adapted quickly.

Lockard has some of the fifth, sixth, seventh, and eighth grade students during the last rotation of the day and she gives them about 15-20 minutes out of their class time to clean up and finish the days recycling. Some of the jobs required for the recycling include: placing the empty, opened milk and juice cartons on the racks to be run through the dishwasher; students are running the dish washer, other students are changing the bags in the bins, while others are taking the food waste to the recycle bin and turning the bin at least four times each day. Others students are bagging the washed cartons and taking them to the dumpster for future pick-up, while other students are making sure the bins have new bags and the signs are ready for the next day.

During summer school the students have been helping Lockard with this, but when the new school year starts, she will be taking student applications and conducting interviews, to find students that would be willing and able to do this on a daily basis after school. They will be paid with funds from the grant.

"I am in great hopes that the recycling knowledge they are learning at school will be taken home and used there," said Lockard. "If every home could see a major trash reduction like the students and I have seen at the school, it would be fabulous."