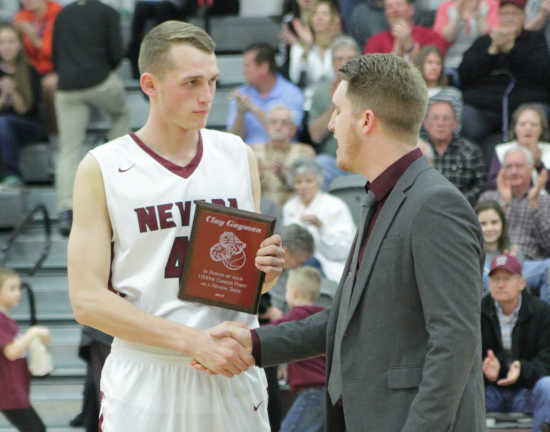 Nevada High School junior Clay Gayman was honored prior to Friday night's contest with Warrensburg for reaching the 1,000 point milestone.

Making his prep basketball debut in November 2014, Gayman exploded onto the scene with a 17 point, 12 rebound performance against Archbishop O'Hara. The 6-foot-6 junior has since blossomed into one of the premier forwards in the state of Missouri, with a host of colleges looking to secure his services.

Gayman has dazzled in his junior season, averaging 24 points, 12 rebounds, and 4.5 blocks per game, while leading Nevada to a 18-3 record. On Jan. 12, while facing St. Pius X in a West Central Conference contest in Kansas City, Gayman eclipsed the 1,000 point plateau in grand fashion. On the Tigers' opening possession Gayman collected an alley-oop pass from point guard Matt Sommer for the slam to put him at 1,001 career points.

"It was pretty exciting," Gayman said of the lob-play. "I know not many guys get a chance to do it the way I did it. Myles (McNeley) set a good back-screen that got me wide-open, and Matt threw a picture-perfect pass right next to the rim, and I was able to finish."

Gayman has since ascended to seventh-place on the Tigers' all-tome scoring list with 1,263. If Gayman continues on his current pace he has a legitimate chance to become the first boys' varsity player to reach 2,000-points in the history of the school. The only NHS student-athelete to have accomplished the feat is Lady Tigers star Lori Nichols, who graduated in 1998.

"Two-thousand points is a long ways away," Gayman said with a grin.

"That, combined with his talent," the third year head coach said. "He's a kid who came in as a freshman and was as hard a worker as there was on the team. Clay has a complete repertoire on the offensive end. He's as good at finishing in the paint as any kid I've ever coached, with his length and his ability to jump at different angles."

Gray continued, "then you combine the fact that he has worked tirelessly on his mid-range jumper, and now his perimeter jumper. When you can score at all three levels (close-range, mid-range and long-range) and shoot free throws well ---- you're going to rack up points. He can hurt you in every single way."

Gray said opportunity knocked for Gayman entering his freshman season, as the Tigers lacked depth along the front line.

"From the first game it was evident he was going to bring things that we needed," Gray said.

Gray fondly recalled that Gayman played two quarters of the junior varsity game before coming off the bench and registering a double-double in a freshman debut that turned heads.

"And that was kind of the start," Gray said. "We knew we had a player that was going to end up being special. But that was really the first time we had confirmation, and he's never looked back."

Gray said that despite the numerous accolades Gayman has racked up over the past three seasons his work ethic remains second to none.

"He continues to want to be better and better," Gray said. "And he finds areas of his game that he knows he needs to improve on to continue to get better."

Gayman discussed the evolution of his offensive game.

"Where I've come furthest is my ability to finish through contact," he said, " and my ability to get to the free throw line. I plan on continuing to improve and being a more diverse offensive weapon."

Gayman said to further improve his game he wants to "eliminate all turnovers."

"Turrnovers are going to happen there's no question," he said. "But I want to get that number as small as possible."

Gayman noted that his recent achievement would not have been possible without the consistently superlative play of Sommer at the point guard position.

"Matt is the best player I've ever played with, by far, without any question in my mind." Gayman said. "He is straight up the most unselfish basketball player I have even seen in my life. I wouldn't even be close to 1,000 points right now without him."

Gayman continued, "Matt is so good at knowing what to do and when to do it, and knowing the flow of the offense. He makes everything go for us."

"It's been really good for him to play with Matthew," Gray said. "Matthew will be the first to tell you, 'I want to get the ball to Clay.' It's really been good for both of them. Clay is setting ball-screens for Matthew and is attacking. And the attention Clay draws opens up things for Matthew as far as being able to pass and attack."

Gray said Gayman is deserving of all the recognition that comes his way.

Not everybody gets to 1,000 points and that definitely needs to be recognized," he said. "But not everybody is as high a quality of kid that Clay is either. And that's a big deal too."

Gray said Gayman's work-ethic is a great example of what area youth basketball players should strive for.

"A lot of younger kids think, 'I want to be good,'" he said. "A lot of people want to be good. Not everybody has the will that it takes to make themselves good. It's more than just showing up when coach has the gym open. It's that, plus pushing yourself on your own time."