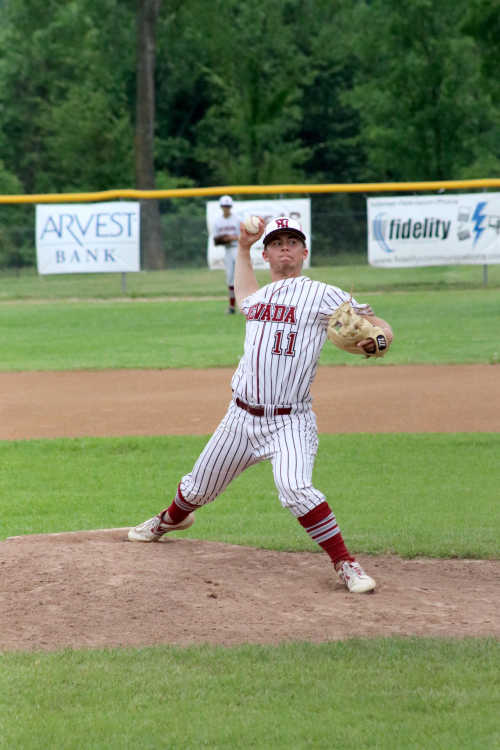 The Nevada Tigers were derailed by the Pittsburg (Kan.) High School Purple Dragons 7-3 in a rain-shortened non-conference matchup Wednesday at Lyons Stadium.

Nevada concludes its regular-season slate with a record of 10-8 overall, while finishing 5-5 in the West Central Conference.

For the second consecutive contest, it was one big inning that spelled doom for Nevada, as the Purple Dragons five-run fourth propelled Pittsburg to victory.

“One big inning tonight and the same was true yesterday (against O’Hara),” said Nevada head coach Danny Penn. “In both games we lost focus, both on the mound and in the field.”

Pittsburg kicked off the scoring courtesy of

The Tigers struck back in the home-half of the third, as Myles McNeley’s RBI-single plated Will Johnson. Nevada then knotted the contest 2-2 via Branden Harder’s fielders choice groundout, scoring Tyler Ketterman from third.

In the fourth, with one out and runners on first and second, Bright was replaced on the mound by Harder. Harder encountered some trouble, walking in a pair of runs, followed by a wild pitch scoring another run. An error in center field led to Pittsburg seizing a 6-2 lead, followed by a Dalton Gromer RBI-double, handing the Purple Dragons a 7-2 advantage.

After the dust settled, Pittsburg had scored five runs on five walks, two hit-by-pitches, one hit and an error.

“We’ve had more walks than normal and each big inning has included an error on a play we’d like to think is routine,” Penn noted. “In a district tournament game, we’ll have a quicker hook if we see a pitcher laboring, but (leading up to districts)we’ve wanted to get guys innings on the mound and in the field.”

Jarrett Owen led off the bottom of the fifth with an opposite field double down the right field line. Logan Armstrong followed at the plate with a single to center field. An error on the play allowed Owen to score as Nevada trailed 7-3.

Owen, who replaced Harder on the mound, allowed the sixth inning round-tripper to Cicero. After lightning was spotted around 6:40 p.m., and with a thunderstorm quickly moving in from the west –– the game was called.

“This season has been kind of crazy with the rain and the stretches of the schedule where we’d play once in a week compared to six games in a week,” said Penn.

“We’ve had some ups and downs, and all season I’ve been impressed with our senior/upper-classmen leadership. So we’ll look to them to get us back on the right track. We’ll use the next three days of practice to hopefully get healthy and refocused.”

The Tigers enter the upcoming Class 4 District 12 tournament as the No. 2 seed. Nevada, along with the top-seeded Monett Cubs (19-3) receive first-round byes and open-play in the semifinals on Monday.

“I think we just need to get back to solid all-around baseball,” Penn said.

“We have to make the routine defensive plays and we need to do a better job of having productive at-bats, especially with runners on base.”