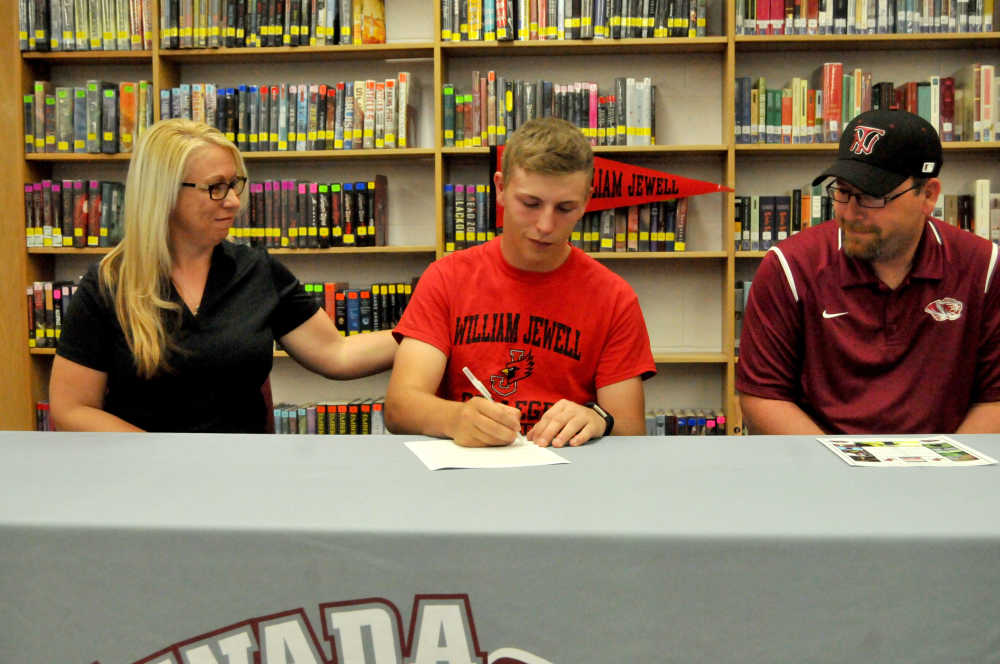 It started with the standout Nevada Tigers’ golfer finishing as co-champion at the West Central Conference Tournament, held April 27 in Nevada. Two days later Hammontree, also known as “Hammo” to his friends and teammates, was named Nevada High’s prom king. And on Thursday, it all culminated with Hammontree signing a national letter-of-intent to attend and play golf for William Jewell College in Liberty, Missouri, just outside of Kansas City.

“It’s incredible knowing that I get to further pursue my career,” Hammontree told the Daily Mail shortly after his signing at the NHS Media Center. “It’s great that I’m able to continue on with my golf career, I’m not ready for it to be over. I just want to keep going.” 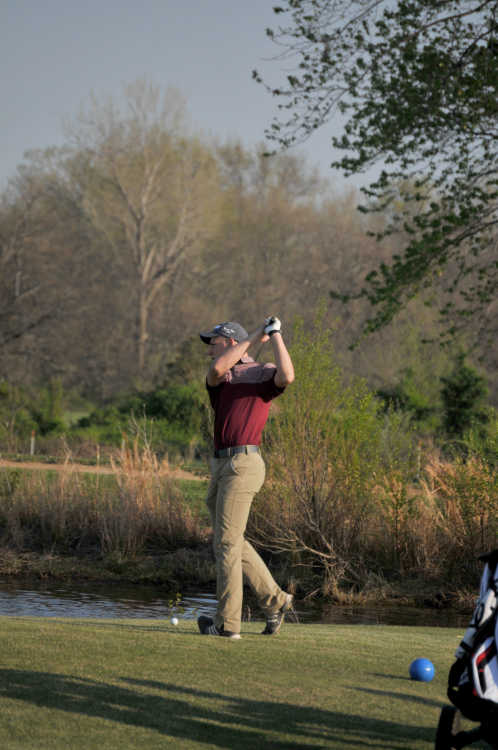 Hammontree, whose father Joe began teaching him golf when he was five, said it’s an exciting feeling to know that “you’re wanted by someone.”

“I officially accepted the scholarship offer last Wednesday (May 3) when I went up to visit the school,” Hammontree said, adding, “I’m going to miss my friends and the small-town feeling.”

It’s been a long, winding journey for Hammontree to reach this point. He suffered a significant loss in May, 2014 when his mother, Leonette, was killed in a motorcycle accident just west of Nevada on Highway 54.

Hammontree, who was also a starting safety on the Tigers’ football team, said he had a large support group that helped him recover from the pain and anguish that struck his family nearly three years ago to the day.

My family, friends and coaches gave me a lot of support throughout the process,” Hammontree said. “And without them I wouldn’t have accomplished any of this.”

Hammontree, who collected All-State golf accolades last season, is readying for his fourth consecutive appearance at the Missouri Class 3 State Tournament, slated for Monday and Tuesday at Sedalia Country Club. The Tigers qualified as a team after running away with a 21-stroke victory at Monday’s sectional tournament in Excelsior Springs.

The Tigers are headed to Sedalia on Sunday for a practice round.

“We’re working on our short-game and keeping the ball in the fairway,” noted Hammontree. “Sedalia is known for having thick roughs, so if you miss the fairway it can punish you. So we are working on that and our up-and-down game.”

Although Hammontree confirmed that golf was definitively his favorite sport, he was viewed by his teammates as a leader on the gridiron. In addition to playing in the defensive backfield, Hammontree was also a running back, and even the team’s starting quarterback during parts of his sophomore and junior seasons.

“When you’re on the field, his leadership is always something you could look to,” said Tigers’ starting quarterback Braeden Hinton. “If you had a question, you could always go to him because he saw things most people didn’t see. When he did see those things, he was quick to lead you –– and his leadership was incredible.”

“His versatility moving to running back really helped the team out a lot,” noted Hinton. “He was always someone you could look to in the huddle to make the play that needed to be made. It will be tough to replace him not only athletically, but just the presence he had –– knowing that you had that to lean on.”

At the postseason football awards banquet, Hammontree was the recipient of the Tiger Award for being the most outstanding teammate, collecting the accolade for a second time.

“Jacob is someone who put the team before himself,” said former Tigers’ head football coach Erik Yoakam, who coached Hammontree since his freshman season.

Yoakam continued: “Jacob is a fantastic young man that has a bright future in whatever he does. He was a team leader and was always willing to go the extra mile, not only to make himself better, but those around him better as well.”

“Along with this positive attitude comes the leadership of helping the other golfers on the team stay positive when things don’t quite go their way on the golf course,” said Leonard.

“I cannot recall a time the last four years that Jacob has ever made a negative comment or had a negative attitude on the golf course. That type of attitude spreads to the other golfers, which in turn shows a positive leadership quality about Jacob that is a pleasure to coach and, quite personally, be around as a person.”

Leonard warmly recalled that over the course of the past four years, Hammontree always had a good story to relay to the 13th-year coach about his outing on the links.

“Instead of just saying ‘okay, struggling,’ or telling me his score, Jacob will give me the play-by-play account of his round up to that point,” said Leonaard. “I expect it and I enjoy listening to his enthusiasm as he tells me his adventures.”

Leonard added, in reference to Hammontree’s adventures around the golf course “there are some rounds that Jacob will rarely make a par, but ends up shooting close to par. This is due to the fact he can (card) a bogey/double bogey on a hole, but then turn around and make several birdies, and even an eagle, to bring his score back down to par.”

Leonard continued: “It has been a pleasure to coach Jacob on the Nevada Tiger golf team. We have had some adversity that no coach, team, or young person should ever have to experience.”

Hammontree, who plans to major in civil engineering, said his all-time favorite golfer is the late, great Arnold Palmer.