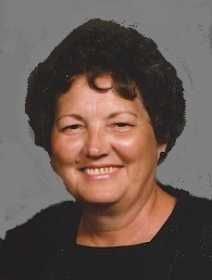 Joan was raised in Farlington, Kan., and attended Girard High School graduating with the Class of 1953. Joan was a homemaker and operated Eastgate Liquors in Nevada for a number of years. She also worked for Dick Shorten at the Vernon County Public Administrators Office for several years. Joan attended St. Mary’s Catholic Church in Nevada. She enjoyed traveling with Val to Branson, Las Vegas, and to Tunica.

Mass of Christian Burial will be held at 10 a.m., on Saturday, July 15, at St. Mary’s Catholic Church in Nevada with Father Peter Savidge officiating. Interment will follow in Mt. Calvary Cemetery in Nevada. Rosary service will be held at 6 p.m. on Friday at Ferry Funeral Home in Nevada with visitation following until 8 p.m.

Those who wish may contribute in Joan’s memory to St. Mary’s Catholic Church or Barone Alzheimer’s Care Center in care of Ferry Funeral Home in Nevada.