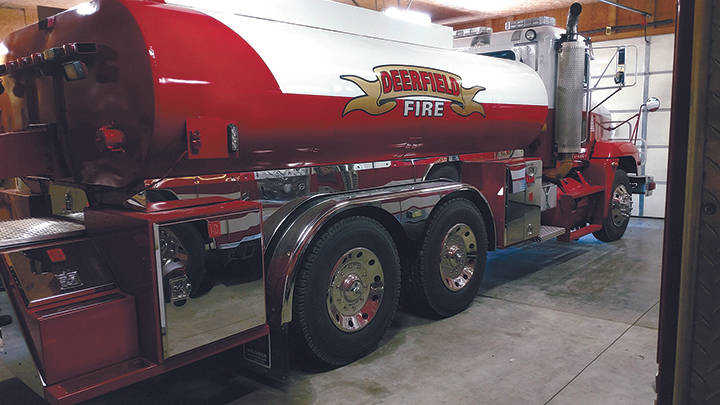 The Deerfield Fire Department used money from a Missouri Department of Conservation grant to purchase a custom built body for this military surplus truck, which was also acquired from MDC.
Submitted photo

The Deerfield Fire Department received $3,000 in grant funding from the Missouri Department of Conservation this week to help offset the cost of a custom fire truck body.

The department has spent more than a year building the combination engine and tanker on a military surplus Freightliner chassis acquired through the Department of Conservation.

Kris Sisseck said department members mounted the pump and 2,500-gallon tank but lacked the equipment necessary to build the tool boxes so they turned to Brunner Fabrication in Joplin.

The department spent $16,000 to have a custom body built for the truck which will serve both as a tanker to haul water to a fire as well as a backup engine to supplement the department’s first out 1989 Sutphen engine.

In total, the department has spent less than $25,000 on the truck versus the cost of purchasing a new combination engine/tanker at more than $200,000.

Sisseck said the department will need to replace a brush truck in the next few years — used for field and brush fires — but will have to wait until the department can raise more money.

Deerfield Fire Department covers the community of Deerfield and unincorporated areas in west and northwest Vernon County and responds to an average of 60 calls each year.

The department currently has a roster of 17 members and at any one time averages 10 firefighters responding to a call.

The $3,000 awarded to the Deerfield Fire Department was part of more than $360,000 awarded to 169 fire departments statewide this year to help purchase personal protective equipment or firefighter equipment.

According to Ben Webster, Forestry Field Program Supervisor – Fire, Missouri Department of Conservation, “Throughout the last 30 years, over $8 million has been distributed to rural fire departments to help them increase the safety of their firefighters and provide them with better firefighting equipment.”