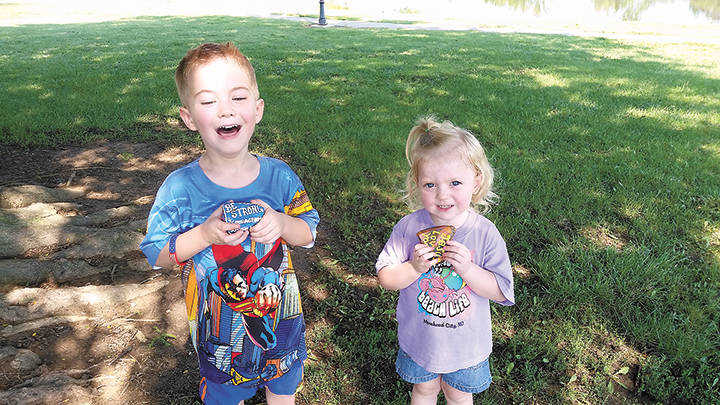 Landon and Ryleigh Varner show off rocks they found this past weekend at Walton Park. Their mom, Kayla Varner, said the kids love searching for the rocks.
Submitted photo

Most of us go about our day paying little attention to the world around us. Should we stop and look around, we just might find we have been invaded — not by some foreign army but rather an army of small, painted rocks.

“We participated when Belles and Beaus started it,” Carla Raney said. “It was fun for my girls. A lot of times when people posted on the page they had hid one with a clue picture of where the rock was, the girls would guess from the clue and we would go look for it that day then relocate it – fun stuff. Painting rocks to hide and then coming up with the perfect hiding spot and clue was a fun way to spend the day.”

Just how did this get started in Nevada?

“I had seen this done if a few surrounding communities,” Beth Stewart said.

She is the founder of the Facebook group Nevada, MO Rocks.

“We started it at Belles & Beaus as an activity during one of last summer’s Thursday’s Downtown. We provided the rocks and paints and started the Facebook group and invited the community to share in the fun.”

That was last summer. Since then, the group has grown to 300 members.

“We want to thank all of you for joining this group!” Stewart posted. “It’s purpose is to create a clean fun family friendly activity for all ages to participate in our little town.”

There are a few rules for this game.

“On hiding — safety first — don’t hide them where you have to climb, crawl or where someone might trip on them,” Stewart wrote in a June 22, 2016, post to the Nevada MO Rocks page. “Remember there will be lots of children looking for these. Hiding in plain sight is the most fun. High traffic pedestrian areas are great. Rocks are HAPPY outside so let’s keep them out of the stores.”

She asked rocks be marked with “Post Pic to Nevada Rocks” and the Facebook icon and that they not be taken from private property or business landscaping.

“I knew people were hiding them but I’d never seen any when I was out with my daughter,” Grace Rhodes said. “The first time we found some at Walton she was so excited that we had to paint and hide some the very next day!”

Popular places around Nevada include Walton Park and Radio Springs Park though the pictures posted to the Facebook group hints at rocks hiding in many places around town.

This phenomenon appears to have been started by Megan Murphy who created the Kindness Rocks Project in 2015. Since then, it has spread in one form or another across the country and around the world.

In a video on her website, Murphy explains she had written a note on a rock and left it at a beach only to be found by a friend of hers.

The Kindness Rocks Project can be found at http://thekindnessrocksproject.com/.