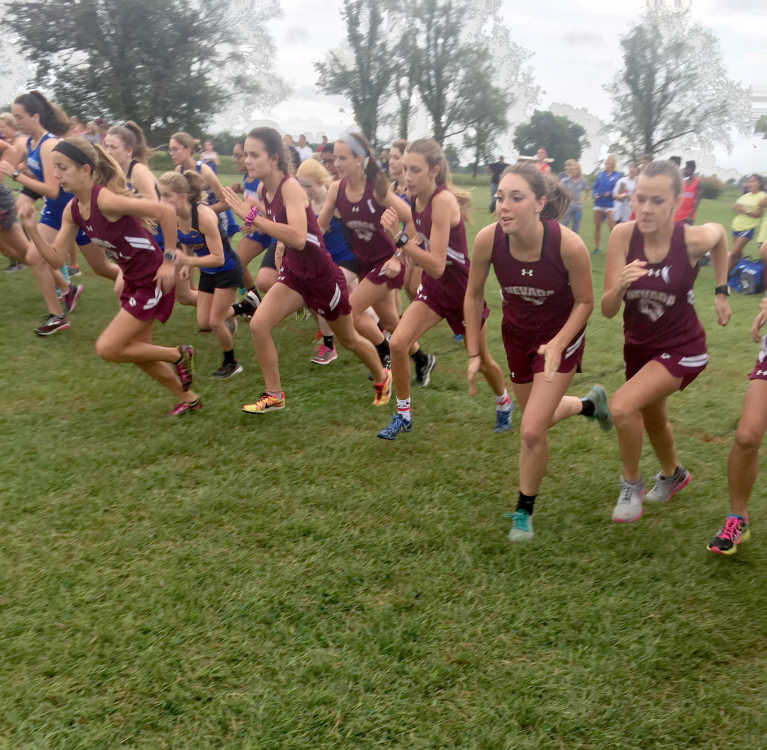 “I was again very excited with how we ran,” said elated Nevada XC coach Ryan Watts, adding, “we had many personal bests, or near personal best times. Calli’s first-place finish was four seconds off her best time ever, which she (clocked) at (last year’s) Chili Pepper meet, with 30 to 40 girls pushing her.”

Watts continued: “Tuesday night she ran nearly as fast all by herself, which is very hard to do. So we know if there had been someone up near the front (with her), her time would have been much faster.”

“We ran very well in Lamar,” said Watts. “It always amazes me, the talent level at this meet. We are always looking for tough meets to really challenge us. Sometimes we have to travel a long way to find them, so it’s nice when they are only 25 minutes away.”

It was a grueling 96 hours for Watts’ squad, having competed at the St. Louis-area Six Flags Open on Saturday, then traveling for many hours, culminating in a quick turnaround at Lamar.

“We have been through a lot in the last few days, between meets and tough workouts,” noted Watts. “So it’s again very reassuring that we are running so fast on sore legs. We know when we start to taper off and freshen up, we will see our times get even faster.”

Watts said the Lamar Invite was a good challenge for his squad.

“The meet was very large and very competitive,” said Watts. “Running in groups that large is helpful for us to prepare for districts and state. It also presents a challenge of having to be more aware of where we are as a team. With so many additional runners it really spreads everyone out. That makes keeping track of what place we are in more difficult, but it is also good practice for the championship meets.”

Also competing at the Lamar Invitational, were three Sheldon R-8 student-athletes — Matt Bogart, Judd Loyd and Nici Hites. Bogart ran his personal best time of the season, as the junior clocked a 21.08, reducing his 5K season average to 21.76.

Loyd shaved major time off his season average (25.04), concluding with a time of 23.38. Hites, competing in just her second race of the season, ran a 29.97, trimming nearly four minutes off her season-opening time clocked last week in Hermitage.

“After competing at Hermitage, and the team gaining better experiences in what to expect at different race locations and terrain —I expected better times for the team, and I was not disappointed,” said Sheldon cross country coach, Mike Galimberto. “They entered this race with improvement in times and performance as a primary goal, and it was achieved. I could not be prouder of this group of kids and how they want to succeed in this sport.”

“It’s really exciting seeing Calli run as well as she is,” said Watts. “She really embodies what we try and preach as a team, and that is, ‘hard work pays off.’ It’s really hard to show up to practice every day and bring your best effort, to get out and push yourself as hard as you can. But that’s what it takes to be great and, that’s what she does.

Continued Watts: “In a sport where your success is based on your effort, the fact that Calli does so well week-in and week-out speaks volumes about who she is as a competitor.

“Her success is really based in her desire to win. She is competitive in a way that is inspiring to her teammates. She comes to every race with the intent to win it. If you are going to beat her, you better believe it is going to be with your best effort because she is always going to give you her best.”

For both schools, its the 2nd annual Nevada High School Cross Country Invitational. Hosted by NHS and NMS, the event is slated for today at Frank E. Peters Municipal Golf Course. Middle school division races kick off at 3:30 p.m. The starting gun for the girls varsity 5K is set to go off at 4:30 p.m., with the boys 5K to followed 30 minutes later.