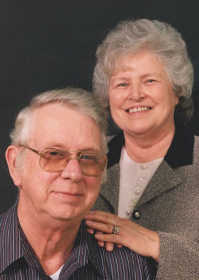 Billy Ray Dickey, 79, Nevada, passed away on Thursday, Sept. 28, at Mercy Hospital in Joplin, following a brief illness. Bill was born Jan. 30, 1938, in Barton County to Elbert Ray and Thelma Pearl (Hersh) Dickey. He was united in marriage to Mary Evelyn Venable on Aug. 20, 1957, in Lamar, and she survives of the home.

Bill was raised in Barton County and attended school in Oskaloosa. In 1967 Bill came to Nevada and began working in the lumber business. He worked at Nevada Lumber, which later became Tap-Jac, and then at Barton’s for 38 years until his retirement. For many of those years, he worked in the capacity of assistant manager. He attended the Pentecostal Assembly Church in Nevada.

In his younger years Bill was an avid coon hunter with his father-in-law Fred. He then spent many years enjoying bird hunting, spending many hours working and training his dogs in the backyard.

When his children were growing up the family spent many hours camping, boating and skiing at Stockton Lake and vacationing in Branson, going to all the music shows. Music always had a special place in Bill and Evie’s hearts. They enjoyed many hours with family and friends at different people’s homes playing music and even had a band that played at different events and church.

After their children were grown Bill and Evie began riding mules, with many different trail ride groups and even had a covered wagon. Their grandkids learned to ride mules also at their grandparents’ home and Bill made sure that they had a very safe horse to ride on named Diamond.

Bill eventually stopped mule riding and purchased Belgian Draft horses. He went to horse pulls with them up until the time he was no longer able.

Above all his wife of 60 years, Evie, his children, grandchildren and great-grandchildren, along with his faith and love of God were always first place in his heart.

Graveside services will be held at 1:30 p.m. on Monday, Oct. 2, at Liberal Cemetery in Liberal, Mo. The family will receive friends on Sunday from 4 to 5:30 p.m. at Ferry Funeral Home in Nevada.