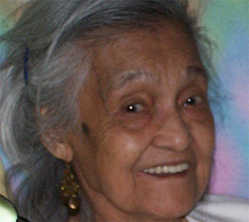 Clarita Peliþo Ward, 95, formerly of Sheldon, passed away on Sunday, Oct. 1, at her home in Decatur, Ark. Clarita was born June 10, 1922, in San Juan, Rizal, Philippines to Angel Peliþo and Josefa Babida.

Clarita, the oldest of 10 children, was raised in the Philippines and attended school there. She was united in marriage to Loretto Perez who passed away in 1942 during the Japanese Invasion. Clarita and her family became refugees during World War II and she later began working at Clark Air Force Base where she met Harrison P. Ward. On Feb. 2, 1946, she was married to Harrison in Manila, Philippines, and he preceded her in death on Sept.18, 1985.

Following Harrisons time in the service they moved to Sacramento, Calif., in 1948 and lived there until 1959 when they came to Sheldon. Clarita worked at Nevada State Hospital for more than 30 years until her retirement. For the past 20 years she has resided in Decatur to be near her family. She was a member of St. Bernards Catholic Church in Bella Vista, Ark.

Funeral services will be held at 11 a.m. on Friday, Oct. 6, at Ferry Funeral Home in Nevada. Interment will follow in the National Cemetery in Ft. Scott at 1:30 p.m. The family will receive friends at 10 a.m. prior to the service at the funeral home. Those who wish may contribute to the American Cancer Society in care of Ferry Funeral Home.