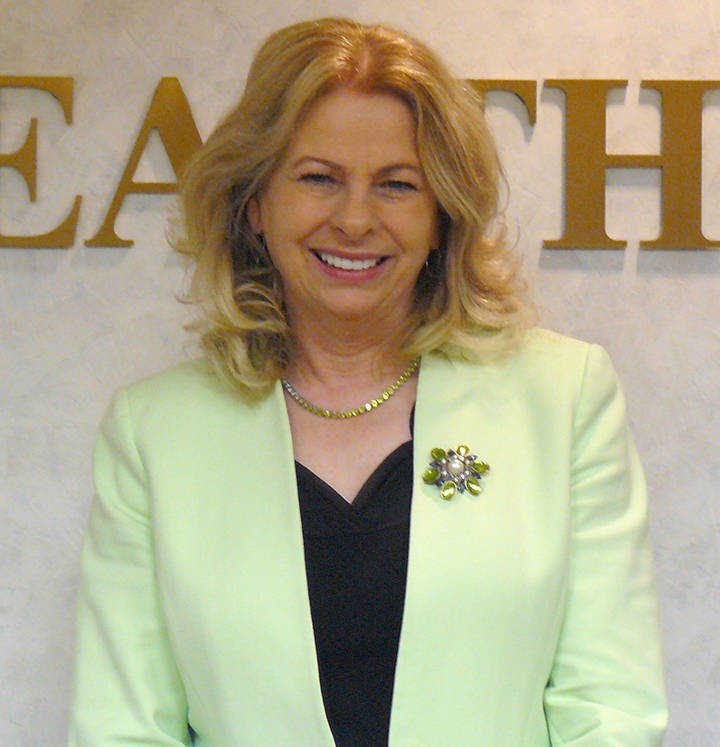 Paula Baker, President and Chief Executive Officer of Freeman Health Systems, based in Joplin, took time on Friday to answer questions about Freeman entering into a two-year contract to manage Nevada Regional Medical Center beginning in November. Baker has been CEO since 2011.
Johannes Brann

On Friday morning, Paula Baker, president and chief executive officer of Freeman Health Systems of Joplin sat down in Freeman’s boardroom for an interview.

With the adoption of last week’s city ordinance, calling for Freeman Health Systems of Joplin to perform an analysis of Nevada Regional Medical Center and to manage the facility for up to two years, questions and comments were shared at that city council meeting and since then.

Is Freeman out to take over NRMC? Is Freeman pouring in money to get NRMC up to 70 bond cash days? What will be done in that financial analysis the city is requiring?

When Freeman bought the hospital in Neosho it had 60 beds, why does it now have only 25?

Asked if Freeman is interested in making NRMC “a glorified band-aid station,” Baker said she had heard those concerns and pointedly said, “We would not be entering into a management agreement if that were our goal.”

One part of the covenant with the trustee for the hospital’s bondholders is that NRMC maintain at least 70 bond cash days of funds which is just over $8 million.

The management agreement with Freeman — which may be concluded as early as this week — does not include Freeman providing an infusion of cash. The management contract with Quorum cost $437,000 per year while the one with Freeman is projected to be about $200,000.

Baker said, “Our goal is to help Nevada Regional Medical Center be as strong as they possibly can, to remain independent but strengthen their financial trajectory and to be able to add services right there in Nevada.”

Baker stated that she and her team at Freeman has “great regard for the mission of Nevada’s hospital” as a safety net for Nevada and surrounding communities.

She said, “We’re very respectful of that and truly our goal is to help make them as strong as they possibly can be because there’s so much at stake here. … And we take this as a very awesome responsibility and we will honor that to the very best of our ability.”

Baker added that when a patient needs a higher level of care “we can always facilitate transfers.”

The council resolution requires an in-depth analysis of the operations of NRMC and to provide a full report and recommendations to the hospital board and city council within three months.

Another provision in the city’s resolution left open the possibility of Freeman performing a basic financial assessment prior to agreeing to manage NRMC. The Freeman CEO indicated no such pre-examination would be necessary saying, “Whatever it is, it is, and that is what we’ll deal with and that is where we will start.”

Said Baker, “We will work very collaboratively with their staff and board to really review all their operations and see how we may assist them in making it more effective.”

She added that any good business person will look at expenses but her philosophy at Freeman and for Nevada will be “to build volume by providing additional services and to find ways to increase trust in and use of Nevada hospital.”

On or about Nov. 1, an eight or nine-member team will come from Freeman to conduct the analysis. This will include Baker along with Freeman’s chief financial officer, others in accounting, its compliance officer and people in human resources.

She mentioned billing, coding, collections, group purchasing and a review of existing contracts “with the goal of finding them ways to enhance their financial performance.”

“We’re very excited about this opportunity to partner even closer with Nevada Regional,” said Baker.

NRMC has had a relationship with Freeman for a number of years.

Said Baker, “For some time now we have supplied specialty physicians in the areas of nephrology, orthopedics, ENT [ear, nose, throat] and pulmonary care. More recently, we have provided hospitalist coverage.”

Dr. Cameron Crymes, then a physician at Nevada Regional Medical Center, was the first director of hospitalist care at NRMC. Since his departure in May 2016 and until the past few months, most of the physicians providing hospitalist care were supplied by Freeman.

Asked about complaints that some Freeman hospitalists transferred patients to Freeman unnecessarily, Baker said, “I heard that and looked at the numbers. Most of the transfers came from the emergency room. That’s not the hospitalist, that’s a purely medical decision I won’t second-guess.”

In 1993, Freeman acquired Sale Hospital of Neosho. At the time, the 60-bed for-profit hospital which had a surgery unit was struggling financially to keep its doors open. In an effort to maintain emergency and acute care services in Neosho and the McDonald County area, physicians and those who owned the facility were interested in selling the facility to an entity which would make it financially viable and expand services. They chose Freeman.

As NRMC’s current CEO, Kevin Leeper has told his board many times, “In an effort to save money, the government is no longer a friend to small and rural hospitals. They say they want us here to serve our patients but the reimbursement structure they’ve put in place says they really wish we’d go away.”

In 1997, in an effort to help small rural hospitals survive, the Centers for Medicare and Medicaid Services created a special category for small rural hospitals called Critical Access Hospital. CAH facilities are permitted to bill allowable costs plus a further one percent reimbursement. Such facilities are also permitted to factor in capital improvement costs in their Medicare reimbursement.

Following its financial analysis, Freeman converted the Neosho hospital to being a CAH.

This comes with certain conditions such as not being permitted to have more than 25 acute care inpatient beds and must be located 35 miles or more from another hospital. The facility must provide 24/7 emergency care services while the average length of stay for acute care patients must be 96 hours or less.

And there is this stipulation: a Critical Access Hospital must network with an acute care hospital which can provide support to the CAH and receive transfers of acute care patients.

While acknowledging the reduction in the number of available acute care beds, Baker pointed out how Freeman Neosho is financially viable providing residents with emergency care and a range of services.

Freeman Health Systems consists of three hospitals — Freeman West (the main hospital) and East in Joplin and Freeman Neosho — as well as the Ozark Center which is headquartered in Joplin but has some 34 facilities.

Freeman partners or works closely with hospitals and clinics in Girard, Parsons and Pittsburg in Kansas and provides specialty care in Miami and Grove in Oklahoma, along with autism care in Arkansas.

With 465 beds and 4,500 employees, Freeman Health Systems is the largest employer in Joplin.

“We’ve got a lot of bench strength,” said Baker, “both in terms of our medical services and our depth in management skills. I think we’re both going to be stronger because of that and I think that will be very apparent.”