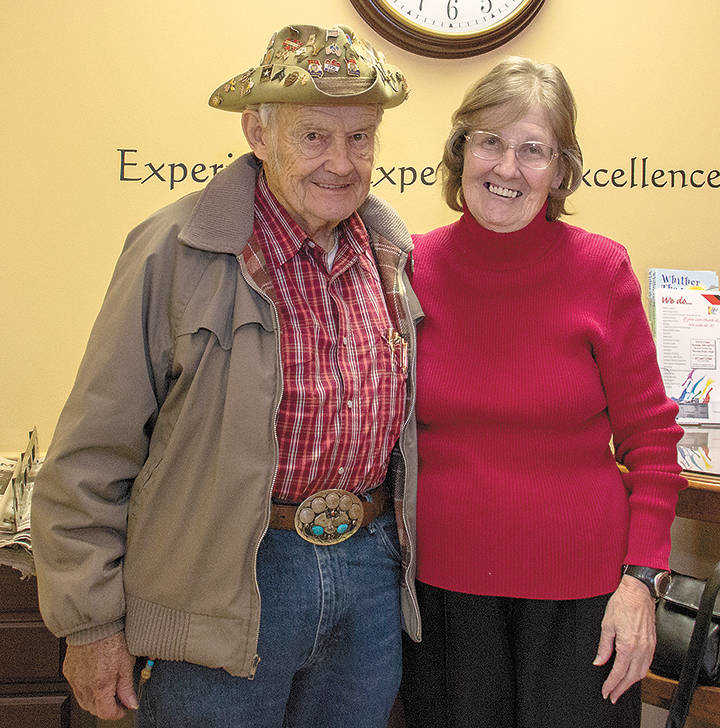 Connie and DeVerne Denning met in 1959 and were married on Valentine’s Day two years later.

“We met at church, at St Mary church,” Connie said. “He used to sit behind me in church. I wore a purple coat and he liked my coat.”

She was an IBM keypunch operator at Farm and Home and he was a meat cutter at the Maxwell Grocery on Atlantic Street at the time.

She was a second-year student at Cottey College at the time and invited DeVerne to the Christmas dance.

Two years later, they were married on Valentine’s Day, 1961. DeVerne was 24-years-old and Connie was 20-years-old.

“In the Catholic church, you can’t get married in that six weeks of Lent so we had decided we wanted to get married and just went ahead and did it on Tuesday,” Connie said.

Unlike this year, in 1961, Valentine’s Day fell on the Tuesday before Ash Wednesday and the beginning of Lent.

“We got married on Tuesday and he had to be back at work on Wednesday,” she said.

DeVerne had just started a new job at A&P Grocery — they never had the opportunity to take a honeymoon.

DeVerne made a career as a meat cutter retiring recently from Wood’s Supermarket. Along the way, they have remodeled houses and he has done other odd jobs on the side even owning a picture frame shop on Osage. He also retired from the Army National Guard after 22 years of service.

His family came to Nevada from Norton, Kan.

“Dad had a farm back there and he got tired of that part of the country and he just wanted to relocate so he ended up in Missouri and he liked it,” DeVerne said.

Connie’s family moved to Nevada from Monett in Sept. 1941 when she was 11 months old.

“My dad had the Texaco bulk plant on north Osage where Hot Spot is now … and the service station in front of it,” she said.

What’s the key to 57 years of marriage?

“When we got married, my parents argued a lot and his parents did too,” Connie said. “Growing up with all of this, I had made up my mind that when I got married — you cant have two bosses — he was going to be the boss and we were not going to fight, especially if we had children … we just haven’t done it. We’ve never been separated. We’ve never had any major fight or argument in all of these years and it was because like my dad used to say ‘a bad example can be the best example if you think about it’ and I had a bad example and I wanted my life to be different and we’ve made it that way.”

“We’ve been blessed,” she said.

DeVerne said, “We get along pretty good, haven’t had a lot of problems living with each other. She’s not hard to get along with.”

“She’s been a good woman up to this point,” DeVerne said, making Connie laugh.

“That may change,” she said laughing.

“She’s always been around when I need her,” he said. “I couldn’t find another one like her I know that and I wouldn’t even want to try.”

“That’s what I’ve said if something happens to him I [will not] even go out to eat with another man,” Connie said. “I don’t want somebody else with their baggage. I’d never find anybody that I’d love as much as I’ve loved him.”

Connie side the greatest thing they’ve shared over the year was raising their children.

Any advice for couples that are tying the knot on Valentines?

“You have to have ideals and dreams and standards and then go for it,” Connie said. “I don’t have any regrets marrying him at all.”