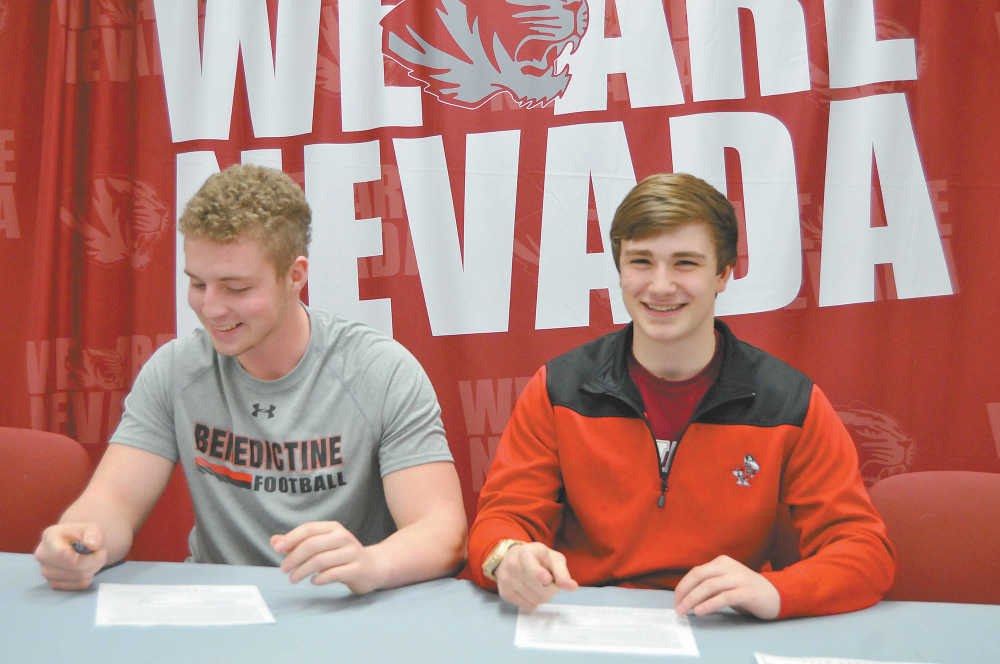 Nevada H.S. senior student-athletes Zach Gardner (left) and Shelby Trotter bask in the glow of their letter-of-intent signing ceremony — held in front of a throng of students, faculty and staff on Tuesday at the NHS Media Center.
Matt Resnick | Daily Mail

“I think both Zach and Shelby are very coachable, and their work-ethic is very good,” said Nevada High head football coach, Wes Beachler. “Those are things that are going to serve them well at the college level. I think they both have a good idea of what it’s going to be like at the next level, and having a good work-ethic will be key to being successful.”

Benedictine, an NAIA school located in Atchison, Kan., finished the 2017 season 9-3 overall, ranked No. 15. Benedictine’s season came to a close in the NAIA playoffs as Bell and company fell to top-seeded St. Francis, the defending NAIA champions, 26-21 Nov. 18 in Fort Wayne, Indiana.

Gardner, a 6-foot, 220 pound running back and inside linebacker, is known for his physicality and violent running style.

“This means a lot to me,” said Gardner, shortly after putting pen to paper. “Ever since I was a little kid I wanted to play college football, and Benedictine is the perfect place. They have a great academic program, and I’ve always wanted to play at the college level with a fellow teammate.”

Gardner garnered an impressive list of accolades during his prep football career, including: 2016 Missouri Football Coaches Association second-team All-District running back; MFCA honorable mention linebacker; Nevada Tigers 2016 Special Teams Player of the Year; and 2016-17 All-West Central Conference linebacker. In addition, Gardner was the recipient of the 2015-16 Kelly Bradham Varsity Letterman Newcomer Award, which goes to the first-year letterman who has made the biggest impact on their respective varsity team.

Gardner’s impressive credentials also include top finishes for his weight class in a host of categories at the Girard (Kan.) High School strength and speed combine the past two years. Gardner placed either first or second in vertical jump, pro agility, power clean, 20-yard dash, squat, and bench press, while placing second in the state in powerlifting (2016-17) and fourth the previous year.

Beachler, who began his second stint leading the Tiger football program this past fall, said he couldn’t have been more impressed with how Gardner embraced his change of role, from feature back his junior season, to more of a fullback and blocking role his senior campaign.

“It’s hard to be more proud of a player than I am of Zach,” noted Beachler. “To go from a guy who was the star of the team to a role player who would carry the ball on third down and goal-line situations, and most of the time be a blocking back for everybody else, I thought he did a really good job of being unselfish and doing what’s best for the team. And that will bode well for him too at the college level.”

The 5-9, 180 pound Trotter was Nevada’s primary deep threat his sophomore and junior seasons, before switching to wing back under Beachler, where he excelled.

“You know those kids who think they’ll play in the NFL? That’s me, this is my dream,” said an elated Trotter. “Benedictine has very successful academic and sports programs, and is equipped with great coaches. The football program is full of great players, and I am honored to play for coach (Larry) Wilcox.”

“Shelby had a pretty good transition to wing back,” said Beachler of Trotter, who also played cornerback. “He is athletic and coachable, so he picked up on things pretty well, and was willing to work hard. And he embraced the change, he didn’t have to do that. Had he not embraced it, it might have been something he struggled with. But he was eager to learn, and did a nice job of fitting in and filling that role.”

Trotter, an All-WCC (slot back) selection, said his fondest prep memory on the gridiron was Nevada’s 36-28 home upset of powerhouse K.C. Center in week 2 of the 2017 season, in which he racked up 94 yards on 18 carries.

In recent years Beachler has coached several players who went on to sign NCAA Division I scholarships, including Nevada High’s Sam Ellifrits, who signed with Missouri State University, and Republic H.S. running back Jerney Jones, who inked in 2015 with the University of Missouri.

“They’re going to have to find a way to enjoy hard work, because it’s going to be a lot of hard work at the college level,” explained Beachler. “And they’re also going to have to learn how to manage their time. A lot of times young people have to have parents and coaches and people looking after them to keep them on track, and that goes away to some degree in college. They’re going to have to learn to manage time on their own, and be sure they have their academics in line, practices in line, and have the energy to do all those things. Time management is going to be key.”

Both Trotter and Gardner credited their parents for getting them to this point. “Without my mom and dad, I would be helpless,” said Trotter. “Everything I do is to make them proud.”

Added Gardner: “My mother is my biggest influence. She has always believed in me, and has always done everything she could for me.”

Trotter said his favorite professional athlete is Kansas City Chiefs wide receiver Tyreek Hill, and his favorite college team is the Texas Tech Red Raiders. In addition Trotter’s anticipated major is elementary education, and he one day wants to coach.