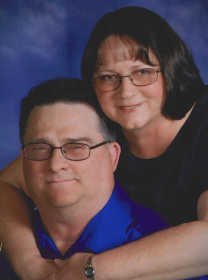 Bill’s father was in the military so they moved around until settling in Lawton, Okla., where he spent most of his childhood and adolescence. On July 5, 1975, he married his love and best friend Jeanie Smith. Bill worked in the oil fields in Oklahoma for several years. He and Jeanie would eventually settle in Nevada in the early 1980s where they would raise their two children, Carol Pennington and Billy Smith. From 1983-1988 he worked at the State Hospital in Nevada. In 1988, Bill was in a motor vehicle accident that left him paralyzed from the neck down and would result in him living the next 30 years in a wheelchair. With excellent care from Jeanie, he was able to remain healthy and outgoing for most of those years. Bill was instrumental in the development of On My Own, the non-residential center for independent living in Nevada, where he served on the Board of Directors. When the weather was nice, he would zoom around town to the farmer’s market, grocery store, or really anywhere where he could meet and talk to people. Some of his favorite things to do were fish, watch football, racing, westerns and give his grandkids rides on the back of his wheelchair.

Nothing was more important to him than his relationship with God. Bill had an unshakable faith that at his core was everything he stood for. Many who knew Bill, would describe him as funny, a great storyteller and most of all relentless in ensuring you heard his story three or four times.

He is survived by his wife Jeanie Smith of the home; his daughter Carol and her husband Jim Pennington, Nevada; his son, Billy and wife Jessica, Kansas City, Mo.; and his daughter Dorene Burlew, Temple, Texas; and grandchildren, Zachary Edison, Randy Collins, Zoey Smith and Silas Smith. He was preceded in death by a granddaughter Alexis Collins.

A Mass of Christian Burial will be held at 10 a.m. on Saturday, Feb. 24, at St. Mary’s Catholic Church in Nevada with Celebrant Father Peter Savidge officiating. Interment will follow in Mt. Calvary Cemetery in Nevada. A Rosary will be held at 5 p.m. on Friday at the funeral home with visitation following from 6-7 p.m. Those who wish may contribute to St. Mary’s Catholic Church.