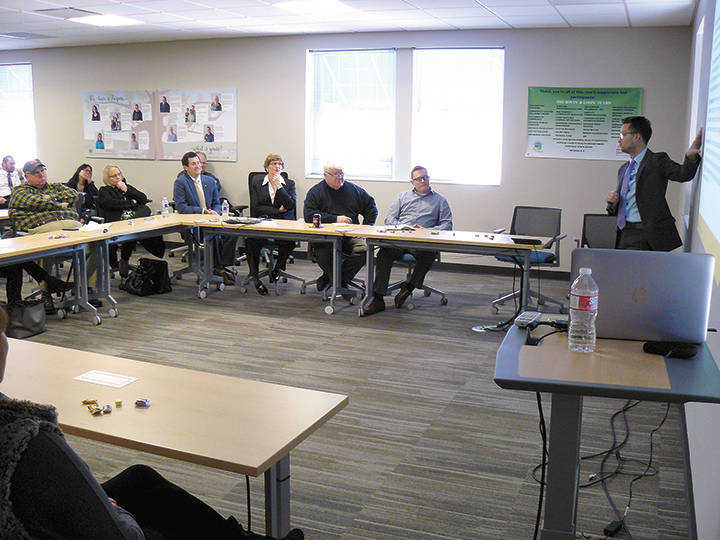 Wednesday morning, in the meeting room at Healthy Nevada, Jason Vangalis of the economic development consulting firm, Ady Advantage, reviews the findings from a series of interviews as well as a group meeting back in January. Some 40 business and government leaders were on hand for the review as part of the process for creating an economic development blueprint.
Johannes

Some 40 business and community leaders gathered Wednesday morning in the meeting room of Healthy Nevada for a 2.5-hour meeting about economic development.

Kicked off by Cindy Thompson, northern district commissioner in Vernon County, she welcomed attendees and distributed a two-sided sheet which reviewed what was termed a “Vernon County economic blueprint.”

The blueprint and presentation were largely produced by the firm, Ady Advantage, an economic development consultancy based in Madison, Wisconsin. Janet Ady, president and chief executive officer and Jason Vangalis, strategic economic development project manager at Ady led the meeting. 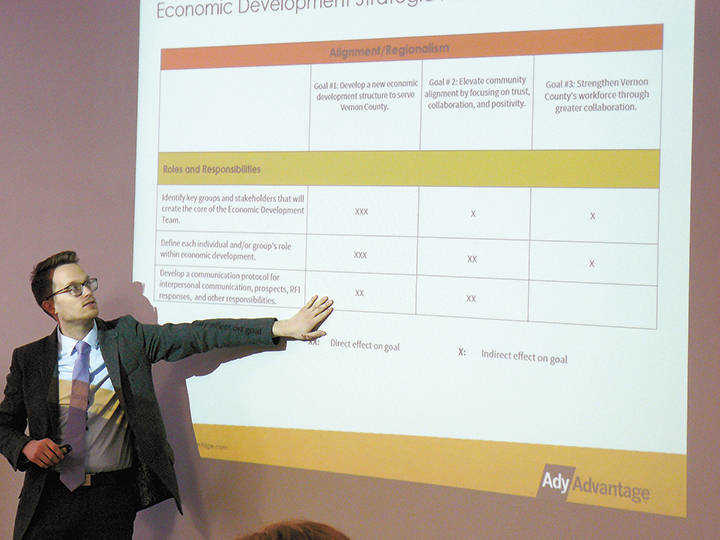 On Wednesday morning, before 40 people gathered in the meeting room at Healthy Nevada, Jason Vangalis of the economic consulting firm, Ady Advantage, reviews some of the findings from a series of 40 interviews and a group meeting at the end of January.
Johannes Brann

Vangalis reviewed things learned from 40 interviews conducted on Jan. 30 and 31. Those interviewed were from a wide range of areas including community service, government, agriculture, education, real estate, finance, health, other employers big and small along with the chamber of commerce and other agencies.

While there were plenty of charts, graphs and statistics, it was a number of insights which clearly grabbed the attention of those present.

Vangalis told the group, “The old ways and old days of economic development are gone.” 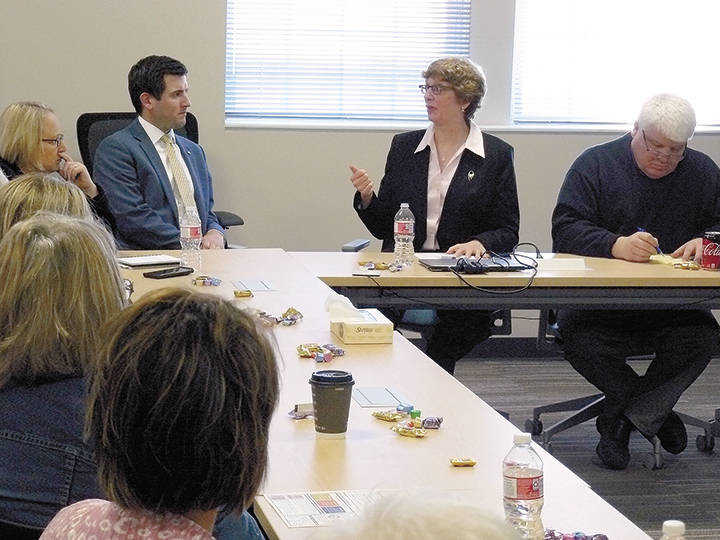 Janet Ady – second from the right – president and chief executive officer of Ady Advantage, an economic development consulting firm, reviews a comparison of how economic development today is quite different from 20 years ago. Some 40 people gathered for the presentation in the meeting room of Healthy Nevada on Wednesday morning.
Johannes Brann

Using a then and now illustration, he began by saying, “The old way — and too many people think it’s still this way today — is an ‘If you build it they will come,’ mentality.”

By that, he meant communities wrongly believe if they recruit one or more companies with good paying jobs then their needs for workforce development, housing, infrastructure and so one will practically take care of themselves.

“That’s not only wrong but such thinking will doom your efforts at economic development in this day and age,” said Vangalis.

Said Ady, “In some ways, the current model is both the reverse of the old and it involves a whole lot more.”

The new model puts the business coming to town as the last step.

“In general, a business will only relocate if three things are already in place,” said Vangalis. “And it’s not, one is more important than the other; all three must be in place prior to a business seriously thinking about relocating or expanding into your area.”

The three he cited began with the site.

He said land in urban centers is at a premium.

“But they don’t want to get in a bidding war with a landowner who heard of their interest,” said Vangalis. “That’s why they prefer dealing with government or an agency whose first interest is appropriate economic development and not all about making the most on the deal.”

To deal with this, he said first it is necessary to have and maintain a list of available properties noting their zoning, roads and available utilities.

“Our company gets calls from site selectors and the turn-around time we have is often about three days,” said Ady.

She thought it best to have a small group — she suggested three people — who are prepared to respond quickly and in the strictest confidence.

Vangalis said the second thing which needs to be set prior to a business siting in an area is “having a pool of appropriately talented workers.”

“Yes, all employers do some training but if they need say, welders, machinists or engineers, for example, they will not provide that training; they want them to be available or they’ll go elsewhere,” said Vangalis.

Several local employers nodded their heads at the mention of workforce development.

In an after-meeting interview, Donna Thomas, who had led the Nevada/Vernon County Chamber of Commerce and was a member of two previous local economic development groups said, “We need workforce development, both in having a better mix of skills but also getting a reputation for having people who want to work and work hard.”

According to Vangalis, the third pre-requisite is what he termed “quality of life” issues. These included housing, schools, infrastructure, good government and overall, being an attractive place for people to locate and raise a family.

“The way it is today, these three factors must be in place before a business will even consider coming to Nevada or anywhere in Vernon County,” said Vangalis. “This means economic development is not just the work of a small group or your chamber of commerce but involves and impacts your whole community before you can seriously attract an out of area business.”

Related to this is what Ady called “the self-image” of a community.

“You may have noticed that a number of the slides Jason has shown speak of the need for alignment,” said Ady.

“During the interviews he and I conducted in January, we certainly did hear a number of enthusiastic and positive views about why they wanted to live here but we often heard a negative story,” said Ady.

In some interviews, this came in the form of longing for what might be termed “the good old days” when State Hospital No. 3, Fram, Key’s, Crane and others were thriving. She said people also disagreed about the types of businesses they wanted to have or keep out.

Said Ady, “Just as the general direction of the 40 we spoke with did not align so I’m sure it will be necessary for conversations across the city and county in order to create the necessary alignment.”

She warned how rumors can destroy opportunities and create false hopes and hard feelings.

“There needs to be a balance between accurate and timely information and sometimes the need for keeping quiet so an opportunity is not lost,” said Ady.

When Vangalis and Ady encouraged the group to be a part of a regional partnership, which could include Joplin but definitely would include Fort Scott, Kelly Ast, program director with Healthy Nevada, played devil’s advocate, challenging Ady to explain how this would benefit Nevada and Vernon County.

“We have some business owners in the room so let me ask you, do any of your customers come from Fort Scott or from Lamar or even Joplin?” asked Ady.

“Raise your hand if you know someone who lives here but works in another town,” said Ady.

Many hands went up.

“Yes, I’m sure employment laws and taxation are different between Missouri and Kansas but workers travel and so do customers,” said Ady. “No community keeps all the dollars from a business to themselves; there’s always a spillover effect.”

She said small businesses thrive when surrounding communities fare well and being part of a regional partnership is the smart way to go.

Said Ady, “This area has grown before and by doing the homework, you can prepare to grow again.”

After the meeting, Thompson said, “I and others will review the information and decide what’s next but I will say this, we’re going forward with economic development.”