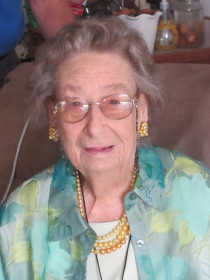 Opal Irene Fleming, age 91, of Joplin, Mo., (previously a longtime resident of Nevada), passed away on Tuesday, March 13, while a patient at Mercy Hospital in Springfield. She had been in good health until recently. She died peacefully of natural causes.

Irene was born on Jan. 8, 1927, in Kahoka, Mo., a daughter of Ralph L. and Edna Opal Ingram McNally. When she was 9 years old, her mother died and she moved to Oakland, Calif., to live with relatives, graduating from high school there. Her father remarried, to Myra Egley. After graduating from high school, she returned to Kahoka to live with her family until going to college.

Irene graduated from the University of Missouri-Columbia, where she majored in Home Economics, in 1951. While at MU, she met Thomas E. Fleming, who was also a student there. She and Tom were married in Columbia on Dec. 22, 1951. Irene was a Home Economics teacher at several high schools, including Nevada High School and El Dorado Springs High School. Tom was a soil conservation agent and farmer in the Nevada area. For many years, Irene and Tom lived on a farm on K Highway southeast of Nevada before moving to a farm along Highway 71 near Lamar. They were married for over 55 years. Tom preceded her in death at age 90 on March 21, 2007. In recent years, Irene had lived in an independent living apartment at College View Manor in Joplin.

Funeral services will be held on Saturday, March 17, at 11 a.m. at Ferry Funeral Home in Nevada, with her son, Brian L. Fleming, officiating. Burial will follow at Newton Burial Park in Nevada.

Family will receive friends at Ferry Funeral Home from 6 to 8 p.m. on Friday.

Memorials in lieu of flowers are suggested to the Alzheimer’s Association (Irene herself did not suffer from Alzheimer’s, but her husband Tom did and she was committed to helping people who do) and may be left in care of the Ferry Funeral Home, 301 South Washington Street, Nevada, MO 64772. Words of remembrance may be submitted to the online guestbook at http://www.ferryfuneralhome.com/messages.php?add=3335.