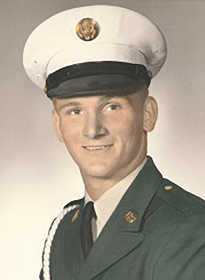 Jerry Dean Moore, 76, Harwood, Mo., passed away on Wednesday, Oct. 3, 2018, at his home after a long battle with COPD. Jerry was born Oct. 11, 1941, in Lowry City, Mo., to Pauline (Reynolds) Moore and Murl Moore of Lowry City. Following the death of his father he was raised by his mother and stepfather, Cecil Losey. He was united in marriage to Shirley Jean Davis of Schell City, Mo., on Jan. 18, 1962, and to this union two children were born.

Jerry was raised in Harwood and attended school in Schell City graduating from Schell City High School Class of 1959. In August of 1960 he joined the United States Army and was stationed first in Germany and then in Chicago. He returned to Harwood and began employment at ConTel Telephone Company, (now Century Link) where he worked until his retirement after 28 years of service. Following his retirement, he along with his wife Shirley, moved to rural Harwood where they have resided for the past 28 years.

In his younger years Jerry loved camping, hunting, and fishing. He enjoyed tinkering, fixing, and collecting guns. He would teach his grandkids to shoot as young as four years old. Jerry watched westerns and wrestling, and listened to old Country and Western music. His favorite song was “Running Bear” by Johnny Preston.

In addition to his wife, Shirley, of the home, survivors include two children, Jerry Dwayne Moore and Kelly Webb, Milford, Mo., and Christene Renae (Moore) Nass and her husband, Tom, of Pineville, Mo.; nine grandchildren; three stepgrandchildren; 18 great-grandchildren; one sister-in-law, Linda Moore, Schell City; and many nieces and nephews. He was preceded in death by his parents, Murl Moore and Pauline Moore Losey; one sister, Betty Jean (Moore) Holt; one brother, Orval Moore; and his stepfather, Cecil Losey.

Graveside services will be held at 10 a.m., Saturday, Oct. 6, at Green Mound Cemetery in Harwood. Friends may call now and until the hour of service at Ferry Funeral Home in Nevada.

Memorials may be made in his memory to Green Mound Cemetery in care of Ferry Funeral Home.