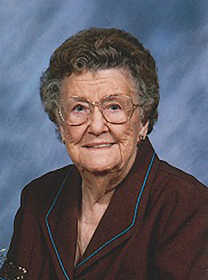 Madge grew up in Metz and graduated from Metz High School. For 35 years she served as Postmaster in Metz until her retirement. In 1998, she moved to Nevada where she has continued to reside. Madge was a member of Rinehart Christian Church. She enjoyed quilting, was past President of the Vernon County Genealogical Society, and was well known for her cooking.

She is survived by one daughter, Lora Johnson and her husband, Gary, Richards, Mo.; two sons, John Baze, Rich Hill, Mo., and Ed Baze and his wife, Mary, Independence, Mo.; six grandchildren; and 11 great-grandchildren. In addition to her husband, Dryden, she was preceded in death by her parents; two brothers, Homer Lyons and Howard Lyons; and an infant daughter, Wanda Carol Baze.

Memorials are suggested to Rinehart Christian Church in care of Ferry Funeral Home.