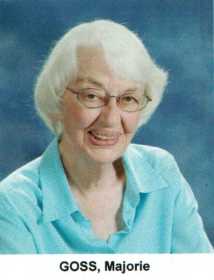 Marjorie was born in Ely, Nev., Sept. 1, 1929. Marjorie was the daughter of Ina Howard and Ernest Raymond Hill. She grew up in Utah, attending public schools in Richfield, Salt Lake City and Ogden, then finishing a bachelor’s degree in English in 1950 at the University of Utah. Shortly thereafter, she married Chal Currie Goss of Salt Lake City. They were divorced in 1969.

Marjorie finished an M.A. at Northwestern University in 1960 and a doctorate in English literature at the University of Oregon in 1970. From that time until 1994 she taught in the English Department at Cottey College in Nevada, Mo. For several years after she retired, she remained in Missouri, where she did volunteer work at the

Bushwacker Museum, was associate editor of its quarterly, handled publicity for the organization and did historical research and writing.

Marjorie enjoyed traveling in Europe, but her favorite country was England: the place where she spent most of her vacation time for many years.

Marjorie returned to Oregon in 2002. While she was drawn to Yachats for its beauty and proximity to the ocean, she ultimately settled in Corvallis for its diversity and intellectual stimulation. In her final years she settled in Albany, Ore.

Marjorie became a Unitarian about 1950 and, while living in Oregon, was a member of the Unitarian Universalist Fellowship of Corvallis.

Contributions in Marjorie’s memory may be made to the Unitarian Universalist Fellowship of Corvallis or Planned Parenthood.

Please share your thoughts and memories for the family at www.demossdurdan.com.